‘DICK JONES – WHERE THE ACTION WAS’ REVIEWED, PLUS REMEMBERING ROBERT HORTON, PETER BROWN 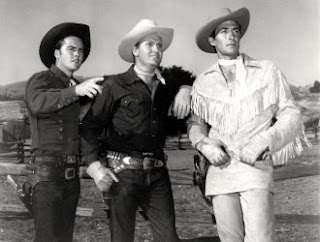 DICK JONES – WHERE THE ACTION WAS, by Ann Snuggs - A Book Review

I was sad when Dick Jones passed away, in the summer of 2014, not just because he was a very nice guy and a fine talent, but because, although we’d met a half-dozen times, and discussed doing it, I’d never convinced him to sit down for an interview about his remarkable career.  I was relieved to learn that Maxine Hansen, Executive Assistant to Mrs. Gene Autry, had interviewed Dick for her Western Television Oral History Project at The Autry (you can read more about that HERE ). 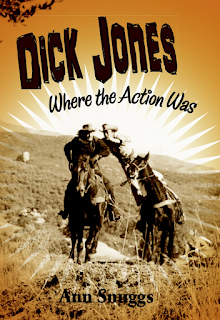 And now I’m delighted to learn that Dick also gave extensive interviews to author Ann Snuggs, which have resulted in the highly readable and informative book DICK JONES – WHERE THE ACTION WAS, from Bear Manor Media.  In the early days of television, in his twenties, Dick starred in a pair of TV series for producer Gene Autry, THE RANGE RIDER, and BUFFALO BILL JR.  Those series are the focus of Snuggs’ book; she’s writing another volume about his early career, and some of his later films. 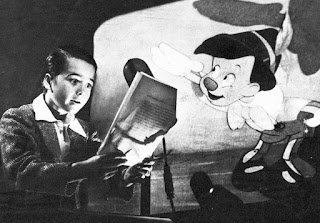 Texas-born Dick Jones – he was known as Dickie Jones when he was younger – was discovered by cowboy-turned-stuntman-turned-Western star Hoot Gibson, who billed the four year-old as ‘The World’s Youngest Trick-Rider and Trick Roper’.  Hoot told the kid he ‘oughta be in pitchers’, and Dickie’s mom said, “Whoopee!,” recalled Dick.  “And away we went to Hollywood.”  Dickie was busy in the movies from the mid-1930s, quickly graduating from unbilled bits in OUR GANG comedies to good roles in Republic serials like BLAKE OF SCOTLAND YARD (1936), and parts in major films like THE BLACK LEGION (WB-1936), working with Humphrey Bogart and Ann Sheridan.  But he really made a splash in 1940, as the voice of the wooden boy in Walt Disney’s PINNOCHIO.  After a stint in the Army during World War II, Jones returned to acting, and did five features with Gene Autry.

That association with Autry led to Jones starring in his two TV series.  THE RANGE RIDER, a fictional western hero, was played by stuntman-turned-actor Jock Mahoney, and Dick played his enthusiastic young wingman Dick West.  The show lasted from 1951 until 1953, producing 78 half-hour episodes.  There were several other kid or family-aimed action Western series at the time; the GENE AUTRY SHOW, THE ROY ROGERS SHOW, THE LONE RANGER, HOPALONG CASSIDY, CISCO KID and RIN-TIN-TIN to name some of the best.  But what set RANGE RIDER apart was the action.  In addition to being likeable personalities and competent actors, Mahoney and Jones were both spectacular athletes, horsemen and stuntmen.  The stars of many of the other shows were starting to show their years, requiring a lot of make-up, and the constant use of stunt doubles.  But when other shows’ cameras would pull back to a long-shot, the RANGER RIDER’s could move in for close-ups as Jock and Dick rode, brawled, tumbled, crashed through windows, and generally destroyed the sets, gleefully producing the kind of choreographed mayhem that made life worth living to kids watching at home.

In 1955 and 1956, Dick Jones, sans Jock Mahoney, starred as BUFFALO BILL, JR., for 42 equally action-packed episodes.   Here, in shows often built around historical characters,  Jones was the definite lead, with Nancy Gilbert as his kid sister Calamity (and no, they weren’t really supposed to be related to Cody or to Calamity Jane), both being raised by Judge Ben ‘Fair and Square’ Wiley (character actor Harry Cheshire). 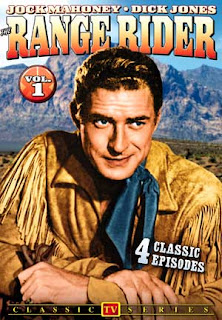 Ann Snuggs’ book details the history of both series.  She looks at not only the star casts, but Gene Autry’s Flying A Productions’ ‘stock company’ of actors – the Lee Van Cleefs and Denver Pyles – and the writers and directors, many from the B-Western world, who made their series so entertaining.  Snuggs examines both series episode by episode, but no surprise, the best parts are the insights from Jones himself, often extensive quotes, about how the shows were made, memories of particular episodes and guest stars, and his adventures with Jocko both on- and off-screen. 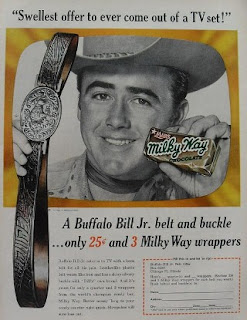 It’s hilarious to learn that Jones always hated the opening trick-riding footage of him in the RANGER RIDER credits because the horse wasn’t moving fast enough – it’s sure fast enough to scare the heck out of me!  And it’s fascinating to learn some of the clever secrets behind Autry’s production approach.  For instance, they shot two episodes a week simultaneously, so any guest star would do two episodes instead of just one. 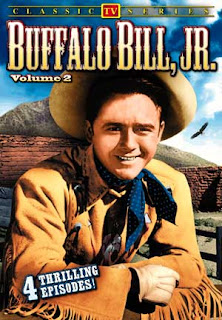 In the 1970s, Gene Autry was in the process of acquiring the rights of all his feature films, and in order to raise the money, he made an understandable, but to my mind regrettable, decision.  He retained the rights to THE GENE AUTRY SHOW, but sold off the rights to his other series, both RANGE RIDER and BUFFALO BILL, JR., as well as THE ADVENTURES OF CHAMPION and ANNIE OAKLEY.  RANGE RIDER and BUFFALO BILL, JR. have both since lapsed into the public domain.  The good news is that episodes of both series are readily available on DVD from a number of companies; the bad news is that the condition and selection varies greatly.  The good folks at Alpha Video have several volumes of each series, each volume a 4-episode disk.  I checked out the first two volumes of each series; the quality is variable, and some have a bit of ‘hiss’ on the soundtrack, but all are perfectly watchable, and the shows are great fun.  While the mix of episodes is random, volume 1 of BBJ includes the premiere episode, FIGHT FOR GERONIMO; volume 2 includes THE DEATH OF JOHNNY RINGO, aired in the second season but believed to be the pilot that sold the show, and featuring Angie Dickinson and James Best.  You can find them HERE. 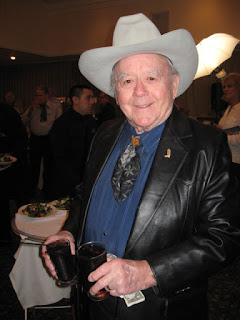 The book includes an introduction by Western music legend Johnny Western, the man who wrote and sang the theme for HAVE GUN, WILL TRAVEL, among many others.  He credits his career to Dick Jones.  You can buy DICK JONES – WHERE THE ACTION WAS, HERE. 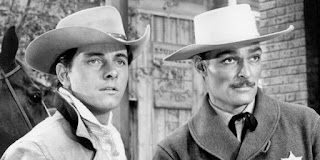 It seems so wrong to lose them; they were the young ones.  On WAGON TRAIN, Robert Horton was Flint McCulloch, the young and cocky scout, the only man not intimidated by the wagon-master, portrayed by Ward Bond .  On LAWMAN, Peter Brown was Johnny McKay, the brave but insecure deputy, opposite John Russell. 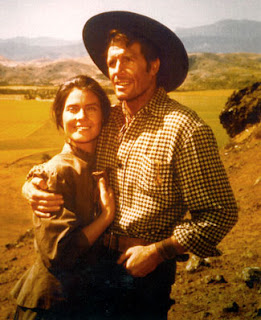 Brown went on to another great Western TV success, LAREDO, first as one of a trio, then a quartet, of Texas Rangers.  Horton next starred in a series that was, in a way, a prototype for the continuing dramas of today, starring as A MAN CALLED SHENANDOAH, a man beaten so badly that he develops amnesia, and searches for his identity, and the reason for the attack.

Both men continued to make Westerns, but neither restricted themselves to the form.  Brown did many features, TV movies, and soap operas.  Horton did film and television, and a great deal of theatre.  One particularly interesting Western project Horton starred in was THE DANGEROUS DAYS OF KIOWA JONES (1966), where he played a drifting cowboy ‘guilted’ by a dying lawman into transporting a pair of killers.  A TV movie meant as a series pilot, it’s a shame it didn’t sell.

Both Horton and Brown made frequent appearances at Western film events in recent years, and seemed happy to meet their fans.  You can catch Robert Horton in WAGON TRAIN on ME-TV, and in A MAN CALLED SHENANDOAH on GET-TV.  Peter Brown’s LAREDO is also shown on GET-TV, and the Warner Archive recently released all seasons of LAWMAN.  All the shows hold up well.  Like their stars, they’ve stood the test of time.  Not a bad legacy. 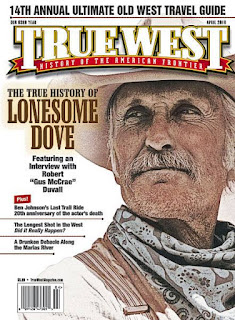 Kind of a short Round-up this time out, but I hope to have more time to fill out the next one a bit more.  Check the April TRUE WEST on newsstands now.  It’s our LONESOME DOVE issue, and features my interview with the great Robert Duvall, and my rundown of all the DOVE-related events happening in Texas this spring!