22ND SANTA CLARITA COWBOY FEST, PLUS ME AND ‘TRUE WEST’! 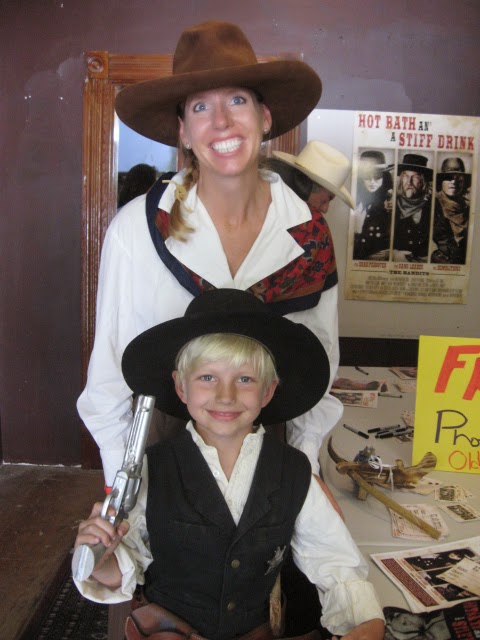 
As I write, the 22nd annual Santa Clarita Cowboy Festival is coming to a close, after a wonderfully enjoyable weekend of music, poetry, art, literature, history, and fun.   When the tradition first began, it was simply as a celebration of cowboy poetry, presented at a high school auditorium.  When the 1994 Northridge earthquake struck, demolishing the auditorium, the event was almost cancelled, when the Veluzat family, owners and operators of the Melody Ranch Motion Picture Studio, offered the ranch for the event.  They’ve generously hosted the Festival at the Ranch ever since.  Melody Ranch reached its greatest fame when Gene Autry owned it, but it had previously been Monogram Ranch, and its early history stretches well back to the silent movie days. 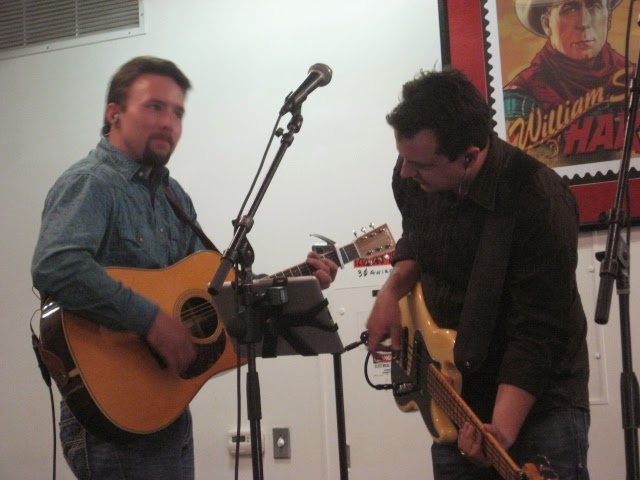 
Happily, more and more Westerns were being filmed, and filmed at Melody Ranch.  When Quentin Tarantino booked the ranch for a full year to shoot DJANGO UNCHAINED, it was feared that the Festival would be cancelled, but they worked around it.  Last year, with the start of work on the HBO miniseries WESTWORLD, the Festival was held, but with much of the western street off-limits.  With WESTWORLD now utilizing all of the ranch, many of us regulars worried about the future of the Festival. 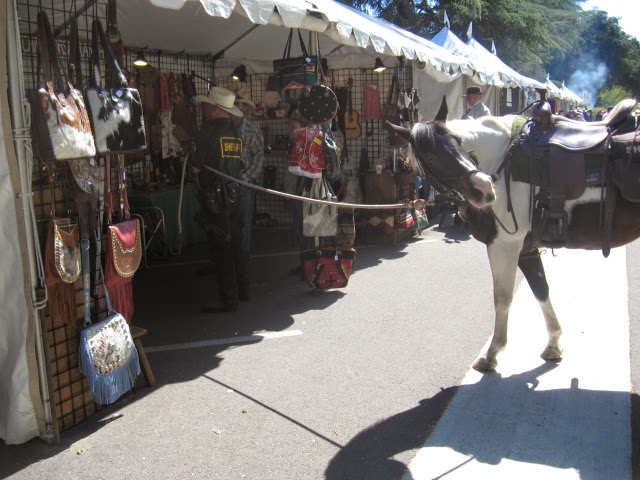 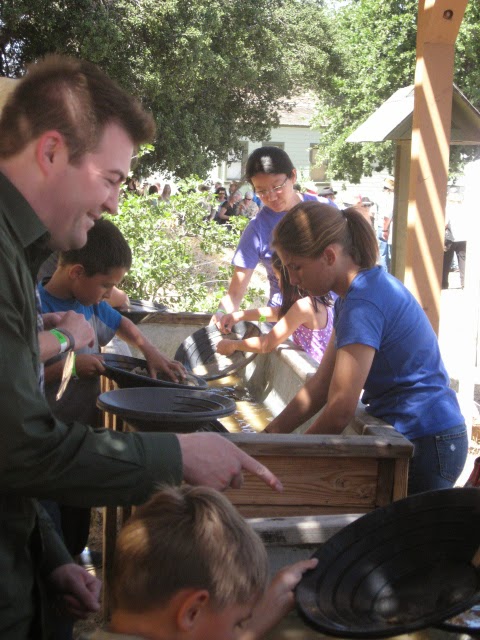 Well, that future, now the present, is bright indeed.  The Festival was moved to Old Town Newhall, centered at William S. Hart Park, once home to one of the greatest stars of the Western silent screen.  The venue is large and beautiful and varied, with plenty of space for shops along Sutler’s Row, an extensive Civil War encampment, Indian lodge, pioneer living display, four music performing stages, and activities like archery, hatchet-throwing, quick-draw laser-tag, and much more. 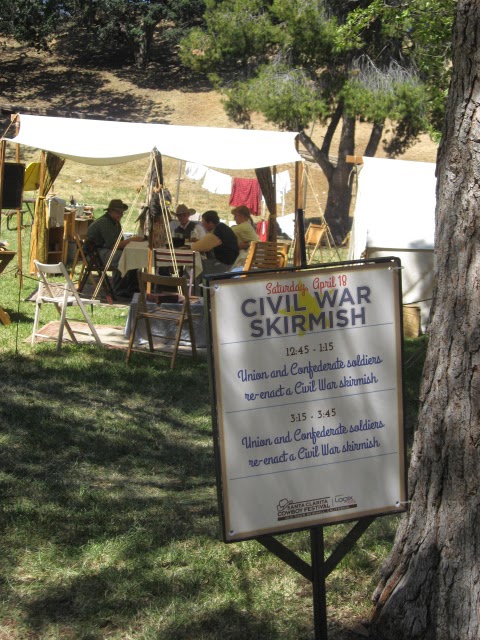 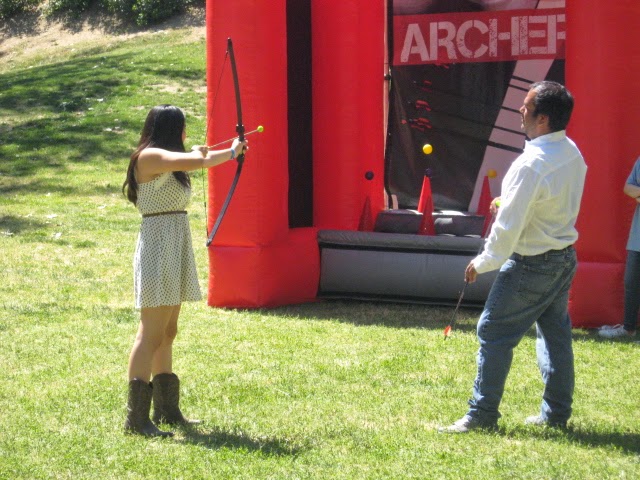 One of my favorite surprises, the folks from Logix Banking, generous sponsors of the Festival for several years, had a booth where you could dress up in cowboy clothes, have a shoot-out against a green screen – a western street added in the background, and be presented with a flipbook of your movie in a minute!  There’s even a link to email it to your friends!  There was so much going on, in fact, that I attended both days, and probably took in less than half of the events, and a tiny fraction of the musical offerings – and I definitely have to come back and tour the Hart Mansion sometime soon. 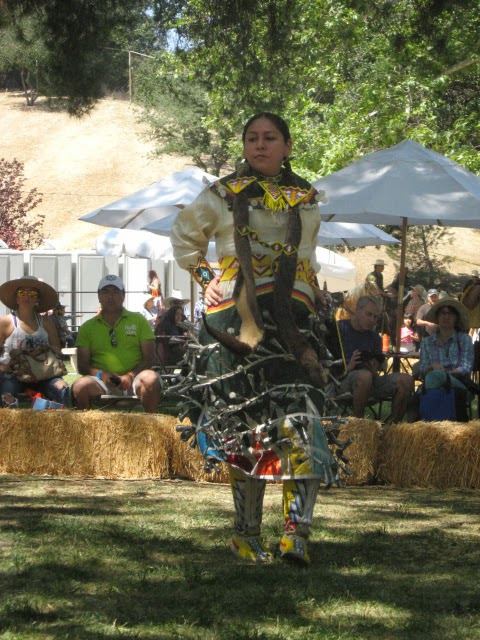 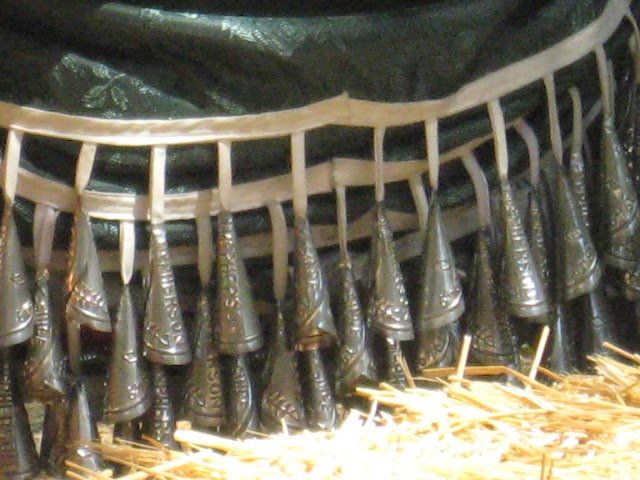 The 'bells' on the dancer above are actually coiled
tobacco-tin lids!

Part of the park is a cluster of historic buildings called Heritage Junction, and I spent most of my time there at the Pardee House, built in 1890, where Jim and Bobbi Jean Bell, of the OutWest Boutique, were again operating their Buckaroo Book Shop, packing the two days with a wonderful mix of poetry and prose discussions, enjoyable and enlightening to Western writers and civilians alike.  There I led four Western-themed panel discussions and interviews on Saturday and one on Sunday, and it gave me a rush to know I was working in a building used as a film location by Tom Mix, John Ford and Harry Carey. 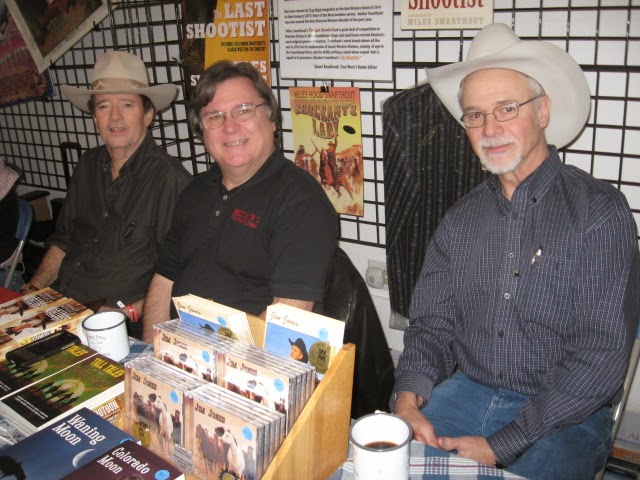 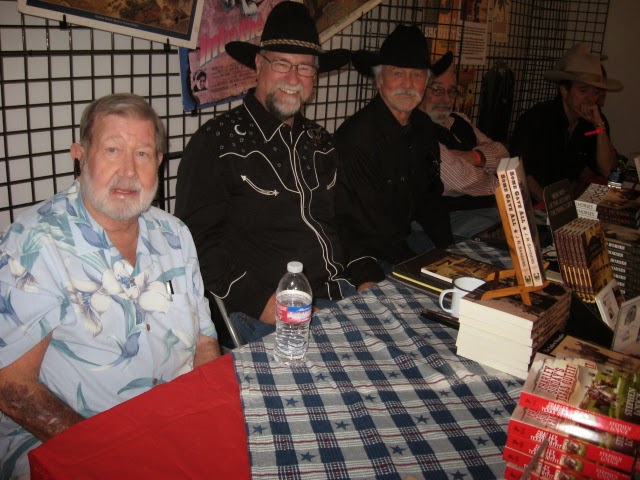 
Right next door was the Kingsbury House, with art displays upstairs and down, and right beyond it the Saugus Train Station – relocated to avoid demolition – where Charlie Chaplin filmed parts of THE PILGRIM in 1917; nearby, in 1936, Chaplin would film the very last scene of MODERN TIMES, the very last ‘official’ silent movie.  The station holds the compact and charmingly eclectic Santa Clarita Historical Society Museum featuring artifacts from the Indians who once lived in the region, mementos of the silent film industry, a diorama of one of California’s oldest oil refinery, and a trunk that belonged Buffalo Bill Cody. 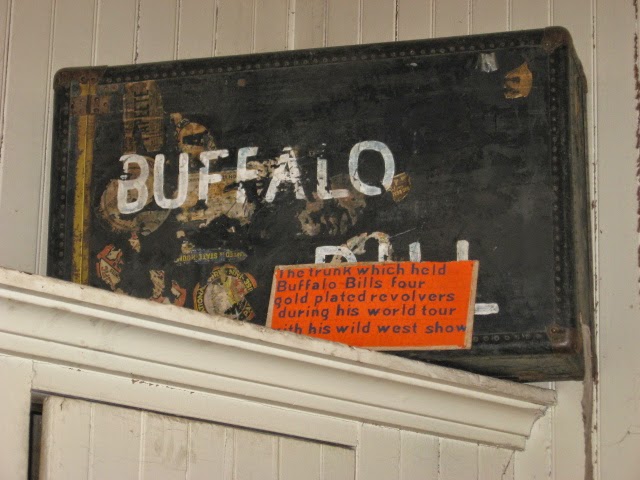 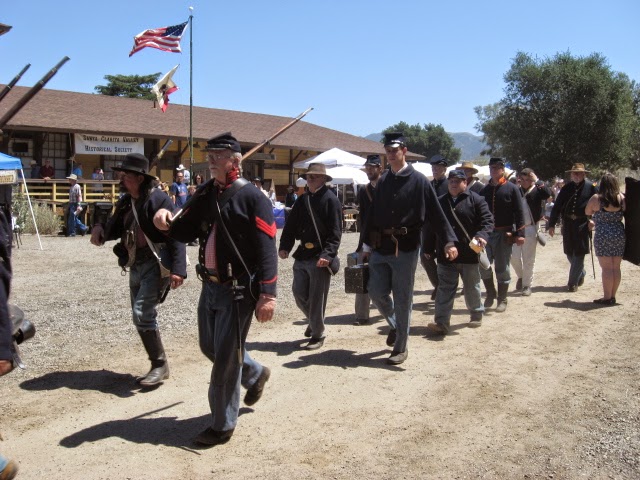 
The beautiful Mogul steam engine was whistling away at the station, and over the hill just above it, a bloody Civil War skirmish was fought, twice a day, with thundering cannon that shook the ground beneath your feet. 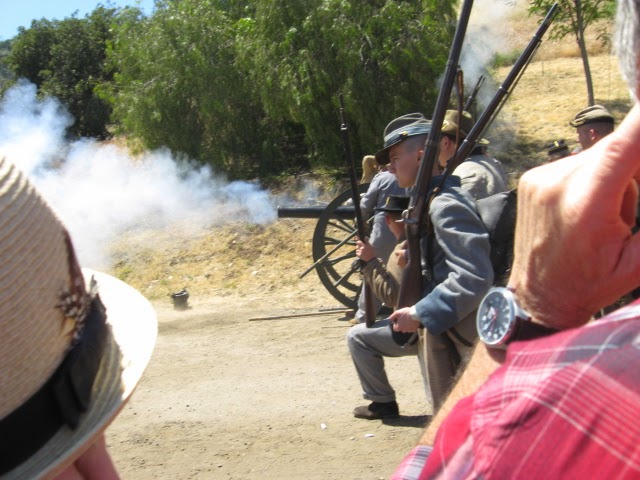 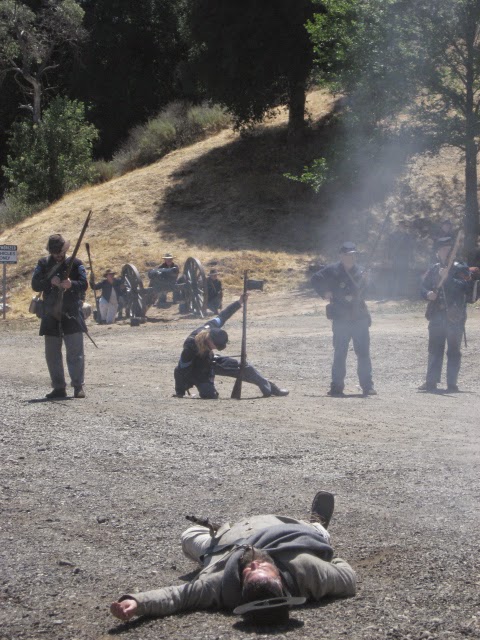 There was a several-day run-up to the Festival, with the walk of fame honoring stunt legend Diamond Farnsworth and poet and singer Waddie Mitchell, screenings and tours, and concerts at four nearby theatres, all of them well-attended.  THE LAST SHOOTIST novelist Miles Swarthout packed a theatre with his talk about the making of John Wayne’s final film, THE SHOOTIST, which Miles scripted.  Peter Sherayko’s CODY: AN EVENING WITH BUFFALO BILL was sold out at the Hart Mansion. 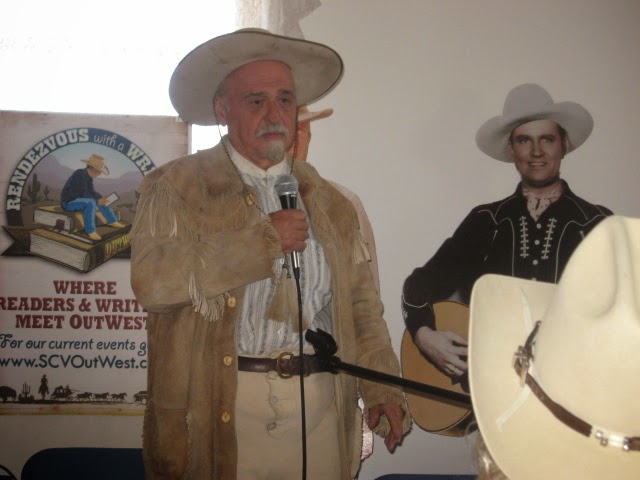 There was a wide variety of appetizing fare, the most crucial being the Cowboy Coffee in the commemorative tin cup, and Cowboy Peach Cobbler, both by the Visalia Cowboy Cultural Committee, who are celebrating their first quarter-century.   And much of the fun at this kind of event is the people you run into – Michael F. Blake, author of HOLLYWOOD AND THE O.K. CORRAL; Jeffrey Patterson, producer and star of HOT BATH AN’ A STIFF DRINK 1 & 2, and doing some casting on 3; and celebrating her birthday at the event, the lovely star and co-writer and co-producer of YELLOW ROCK, Lenore Andriel – incidentally, YELLOW ROCK was shot at nearby Veluzat Movie Ranch. 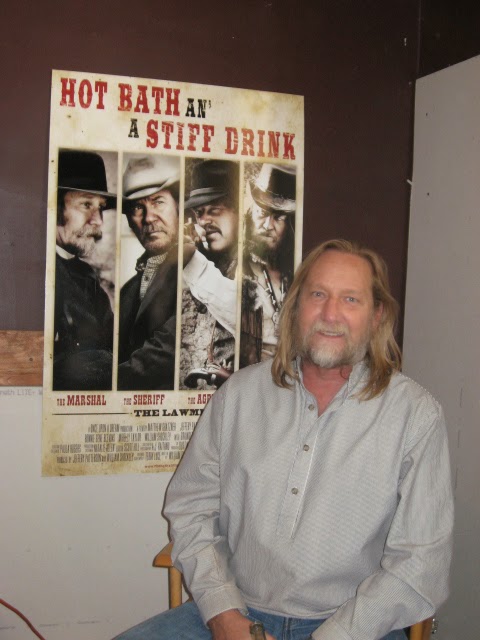 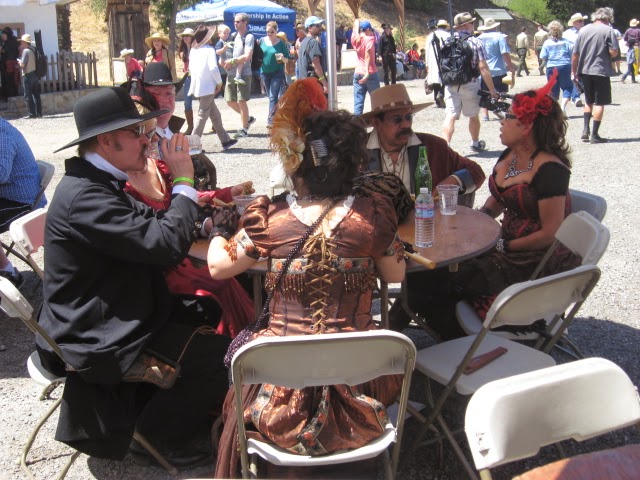 
About 3:30 on Sunday, my wife and I started to head out, but I made one more stop, back at the Buckaroo Book Shop.  I was feeling a bit guilty that here I was, enjoying the largesse of the great William S. Hart, and yet I’d never seen one of his movies in its entirety.  So I picked up a DVD double-bill, to familiarize myself with the founder of the feast.  I’m closing with the short movie below, which was shot there at the Hart Ranch, in 1939, and is one of the very films made with Hart speaking.  It was a new introduction for the re-release of one of his greatest silent successes, TUMBLEWEEDS (1925).  “The thrill of it all!”  Give Fritz a pat for me, Bill.


‘TRUE WEST’ GETS A NEW MOVIE COLUMNIST – ME! 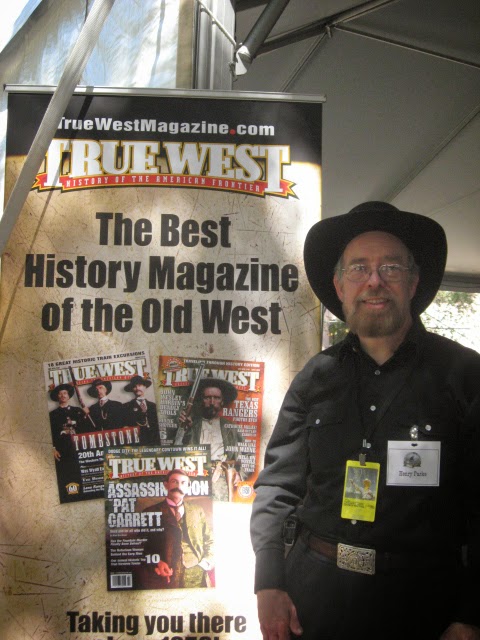 I’m delighted to announce that I’ve just become the new film columnist for the finest Western history magazine in history, TRUE WEST.  You can imagine what a pleasure this is, considering that I started reading TRUE WEST when I was about ten years old, picking it up at newsstands when my Brooklyn family would take summer vacations in the West.  My first column will probably appear in the August 2015 issue – but you may want to start your subscription now, to make sure you don’t miss it! 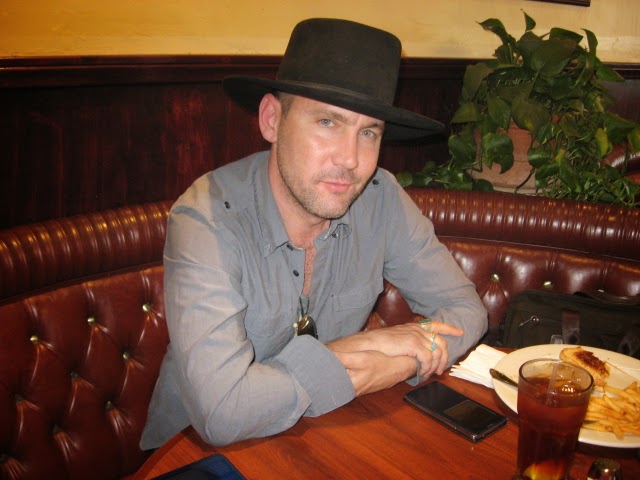 
It’s a short one this week, because I’ve got to get that August column done, but I’ve got a lot of interesting things coming up, including book reviews, movie reviews, and an interview with director James O’Brien, whose WESTERN RELIGION is, to the best of my knowledge, the only Western movie premiering this year at Cannes.  Of course, if you can’t get to France, just keep reading the Round-up – I’ll be reviewing it before Cannes!