Antoine Fuqua, helmer of TRAINING DAY and THE EQUALIZER is set to direct the MGM remake of the 1960 classic, THE MAGNIFICENT 7, which was directed by John Sturges from William Roberts’ screenplay.  The new script is by John Lee Hancock, who wrote THE ALAMO (2004) and wrote and directed the Oscar-winning THE BLIND SIDE.

In the original film’s story, poor peasants hire gunmen to protect their town from the depredations of a pack of bandits, led by Eli Wallach.  In the new version, the villain is a gold-mine baron taking over a town.  The widow of one of his victims hires a bounty hunter, and the six men he needs, to get her justice.  The bounty hunter is Denzel Washington, who was very effective in the Civil War drama GLORY.  The widow is Hayley Bennett, who worked previously with Washington and Fuqua in THE EQUALIZER.  Two of the remaining Magnificent 6 will be Ethan Hawke, fresh from his Oscar nomination for BOYHOOD, and who previously worked with Washington and Fuqua in TRAINING DAY; and Chris Pratt, of ZERO DARK THIRTY and MONEYBALL. 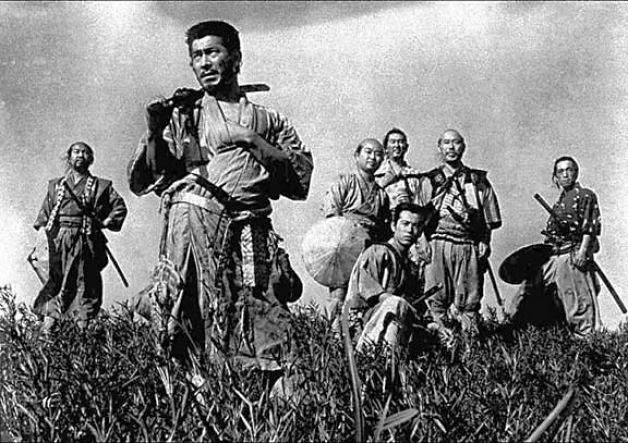 Toshiro Mifune and the rest of the SEVEN SAMURAI

The Round-up had reported in December 2013 (see story HERE) that much-promoted star Tom Cruise was out, as was the screenplay by TRUE DETECTIVE creator Nic Pizzolatto. THE original MAGNIFICENT 7 is itself a remake of Akira Kurosawa’s 1954 classic SEVEN SAMURAI.

YOUR FRIEND AND MINE, ANDY DEVINE, A MEMOIR OF A FATHER AND HIS SON 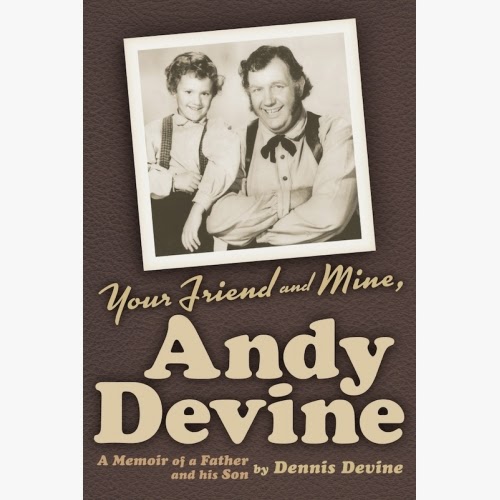 A son, leaving his father’s death-bed in Long Beach, feeling he’s disappointed his parents, can’t bear to go home and face his mother.  So instead he takes a train into Hollywood.  A man notices his size, asks if he plays football, and almost before he knows it, he’s playing a bit part in a movie, along with a pair of USC students, Marion Morrison (later John Wayne), and Ward Bond.  The three will be co-workers and friends for life.  You’d never put that story in a script – too contrived – but that’s exactly how Andy Devine entered the movie business.

One of the most interesting sub-groups of biographies is the life-story of parent by offspring.  Some are heartbreaking, epitomized by Christina Crawford’s MOMMY, DEAREST, and some are revenge pieces, like B.D. Hyman’s MY MOTHER’S KEEPER, which may have given Bette Davis a stroke.  But when the relationship isn’t awful, such a tome can provide a unique perspective on the life of a public figure.  My favorites of this sort have long been GYPSY AND ME, by Erik Lee Preminger, secret son of Gypsy Rose Lee and Otto Preminger; and GLENN FORD, A LIFE by Peter Ford, son of Glenn Ford and Eleanor Powell.  (you can read my review of that one HERE. )  To that duo I happily add YOUR FRIEND AND MINE, ANDY DEVINE, a fascinating story of both a movie star’s life, and the experience of growing up in his shadow. 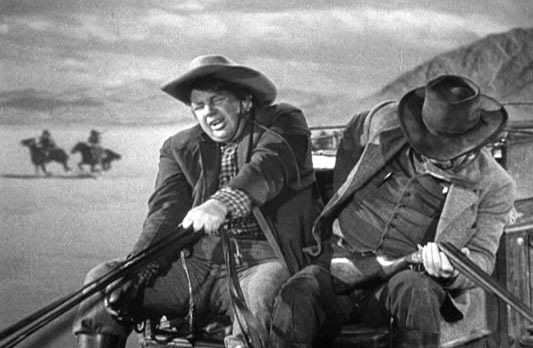 Andy in STAGECOACH -- and yes,
he really drove that team

The beginnings of father and son could hardly have been more different.  Andy was born in Flagstaff, Arizona in 1905, the son of a Tipperary, Ireland-born hotel operator.  In 1939, his son Dennis would start being born at The Brown Derby, where Carole Lombard would command a fleet of eight taxis to take the Devines, herself and husband Clark Gable, and all their Hollywood friends to Cedars hospital, to enjoy drinks and Cobb Salad while Dorothy Devine gave birth.

Devine is a novel choice for such a biography.  While certainly a money-making star, the raspy-voiced comic actor – the result of a childhood accident that lodged a curtain-rod down his throat – was never a leading man, and rarely if ever a lead.  But he was a recognizable and beloved character actor with 191 credited screen roles, as well as years of experience on radio.  And he lived like a star – my mother-in-law went to school with Dennis’s older brother, and he was the only kid to go to and from Van Nuys High in a chauffeured limousine.  Andy starred on TV in ANDY’S GANG for five years, and on WILD BILL HICKOCK for seven.  He took the role of ‘Jingles’ after Burl Ives turned it down, and got paid more than Guy Madison, who played Wild Bill! 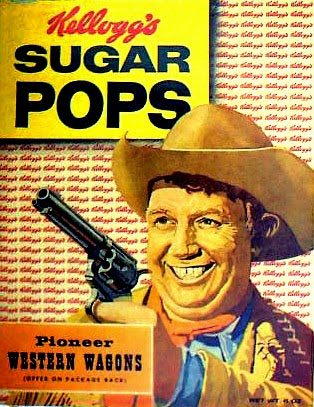 You know you've made it when your
face is on a cerial box!

One of the surprise revelations is the negative part his long-time studio, Universal, played in his career.  Devine was always hoping to be loaned out to other studios, who gave him big parts in important pictures.  At his home lot, they were so eager to have all of their contract players working that they’d cast him in anything as anything, no matter how unsuited he was.  When, after the war, Universal wanted to cut expenses, they tried to humiliate Andy into quitting.  They gave him a horse costume, and Lon Chaney Jr. a bear costume, thinking they’d be mad enough to quit, but they wouldn’t leave until they’d been completely paid off.

From there he moved to Republic, sidekicking four times for Wild Bill Elliot, and nine times for Roy Rogers; he was billed under Trigger, but so was everyone except for Roy.   The book brims with wonderful inside stories about the making of STAGECOACH, CANYON PASSAGE – where Dennis and his brother appeared with their dad, and LIBERTY VALANCE.  Dennis’ analysis of the ages and experience of those in VALANCE is fascinating. 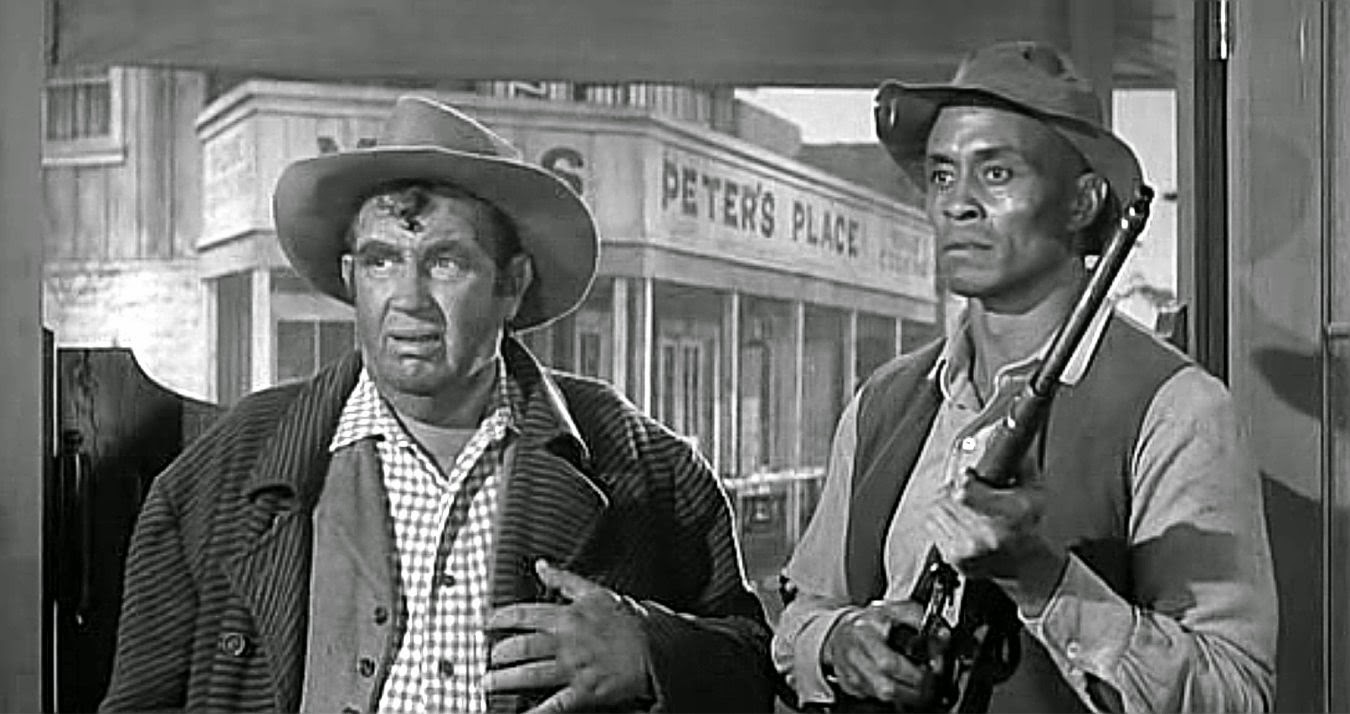 Andy and Woody Strode in
THE MAN WHO SHOT LIBERTY VALANCE

The author pulls no punches in his opinions about some of the biggest names in Hollywood.  Columbia Pictures President Harry Cohn: “Cohn was…a rude, penny-pinching bastard.”  Republic Pictures President Herbert Yates: “For financial security, Dad liked contracts, so he signed with the knowledge that Herbert J. Yates had a terrible reputation.”  Director John Ford: “…Ward Bond unexpectedly passed away in Texas.  At his funeral, knowing that Bond was a Ford favorite, the press asked director John Ford to comment on Bond’s passing.  (He) replied, ‘Now Andy Devine is the biggest asshole I know.’”

Some of the best ‘worst’ stories are about Bing Crosby, whom he describes as, “…a loner, a drunk, and a sociopath, but (who) could be extremely charming when necessary.”  Bing’s wife, Dixie Lee, was a friend of the Devines, and once threw a party at the Devine ranch in Van Nuys.  “She called it the ‘Crapped on by Crosby’ party.  It included everybody who had been cut off or betrayed by Bing throughout the years.  The event had quite a turn-out.”

Dennis Devine doesn’t hesitate to include his parents’ shortcomings as well.  They’re both portrayed as self-centered and uninvolved in their son’s life.  Mrs. Devine, who was the beautiful actress Dorothy House, met Andy when they were both in the Will Rogers/John Ford movie JUDGE BULL, and she gave up her acting career after they married.  Dennis was furious when she moved her lover into the family home under the guise of ‘tennis teacher,’ and when Andy wouldn’t face up to what was going on under his roof, son forced father to kick the lover out.

Dennis was a driven athlete, a breaker of records, and nearly an Olympic swimmer.  One can’t help thinking much of the drive was a desperate need to receive his parents’ approval.  Yet his parents weren’t completely useless.  Dennis was friendly with his father’s gay publicity agent, Stanley Musgrave.  “One night Stanley invited me to have dinner with himself, Rock Hudson, and Cole Porter.  In passing, I mentioned this to my mom.  She hit the roof.  ‘You’re not going to dinner – you are the dinner!”  She made sure that meal never happened. 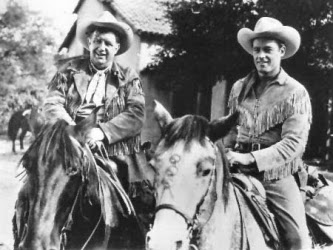 Dennis was closer to his father during the end of Andy’s life, when he had a sensational success playing Captain Andy in various productions of SHOWBOAT.  Andy’s decline and death come in slow and saddening detail.  The main interest in the book is Andy Devine’s life, and it seems at times that Dennis spends more time detailing his own real estate dealings than necessary, but again, so much of Dennis’ drive and ingenuity seems to come from largely raising himself that it is enlightening on its own terms.

YOUR FRIEND AND MINE, ANDY DEVINE, is a highly enjoyable, well-illustrated book from Bear Manor Media, priced at $19.95.  You can order it HERE. 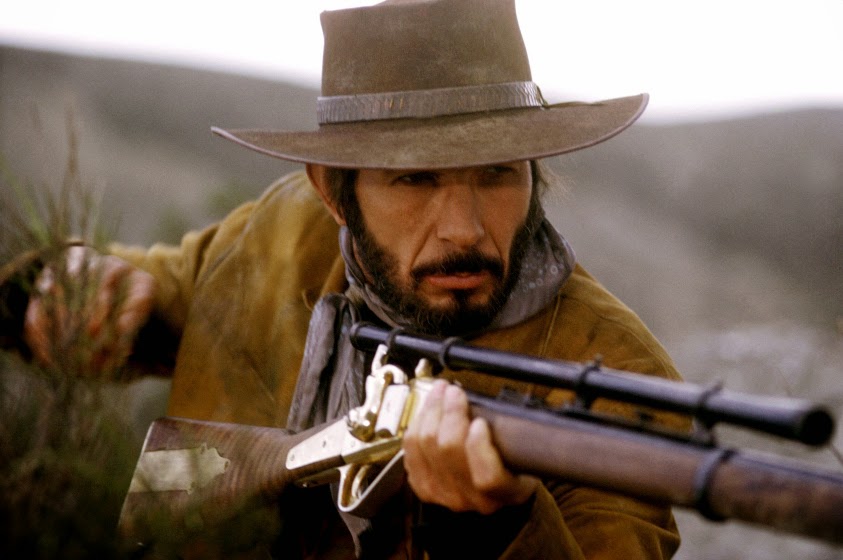 Sad news this week, to learn that we lost Leonard Nimoy.  Although he will always be Mr. Spock to most of us, he appeared in one of the last of the Republic serials, ZOMBIES OF THE STRATOSPHERE, in many 1960s TV westerns, and in 1971 starred with Yul Brynner in the western CATLOW!

Next week I’ll have updates about the Santa Clarita Cowboy Festival and TCM Classic Film Festival, and other cool stuff.  Have a great week!