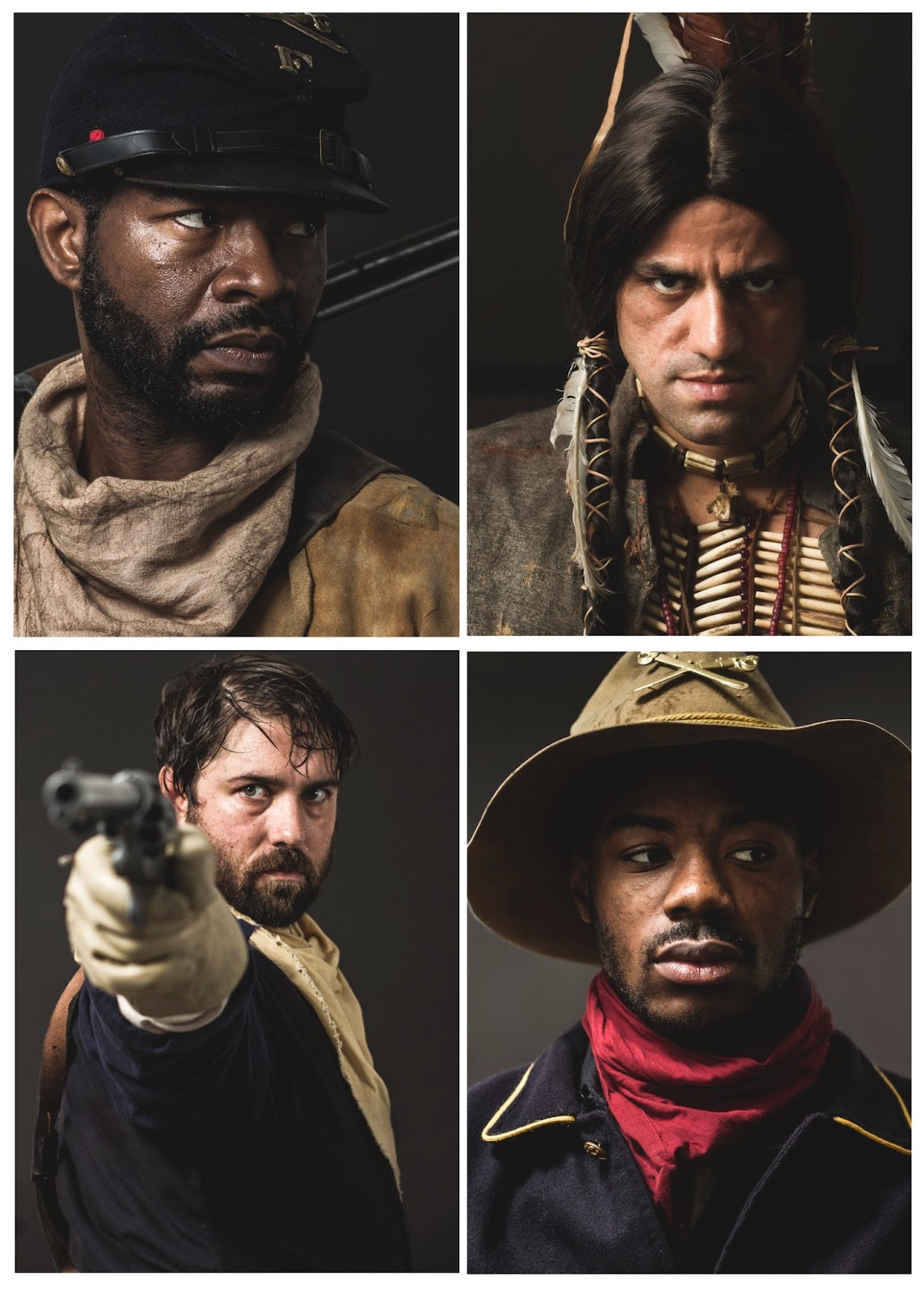 Playing through November 30th, at the Monroe Forum Theatre at the El Portal in North Hollywood, Mitch Hale’s BUFFALO SOLDIER is a taught eighty minutes of suspense, as growing menace strips the brave, sometimes haughty false-faces of a group of soldiers over one long night.  Set in the summer of 1874, four cavalry soldiers are doing reconnaissance in Comanche territory.  Three of them are black former slaves.  Corporal Jofum Wymo (Tony Williams) is a scout who wears a mix of soldier blue and Indian leather.  He’s the most experienced soldier; but he’s haunted by dreams.  Private Benjamin Kewconda (Kendall Johnson) has the least experience, and the least commitment to the job.  He’s got a likeable irreverence, but you worry how he’ll handle himself when the going gets tough.  Sergeant Isaac Williams (Will Catlett) takes immense pride in his position; he respects the Corporal’s experience, and has contempt for the Private’s insubordination.  In charge is Captain Caleb Cooney, the only white man in the group, and he’s not a man to inspire overwhelming confidence. 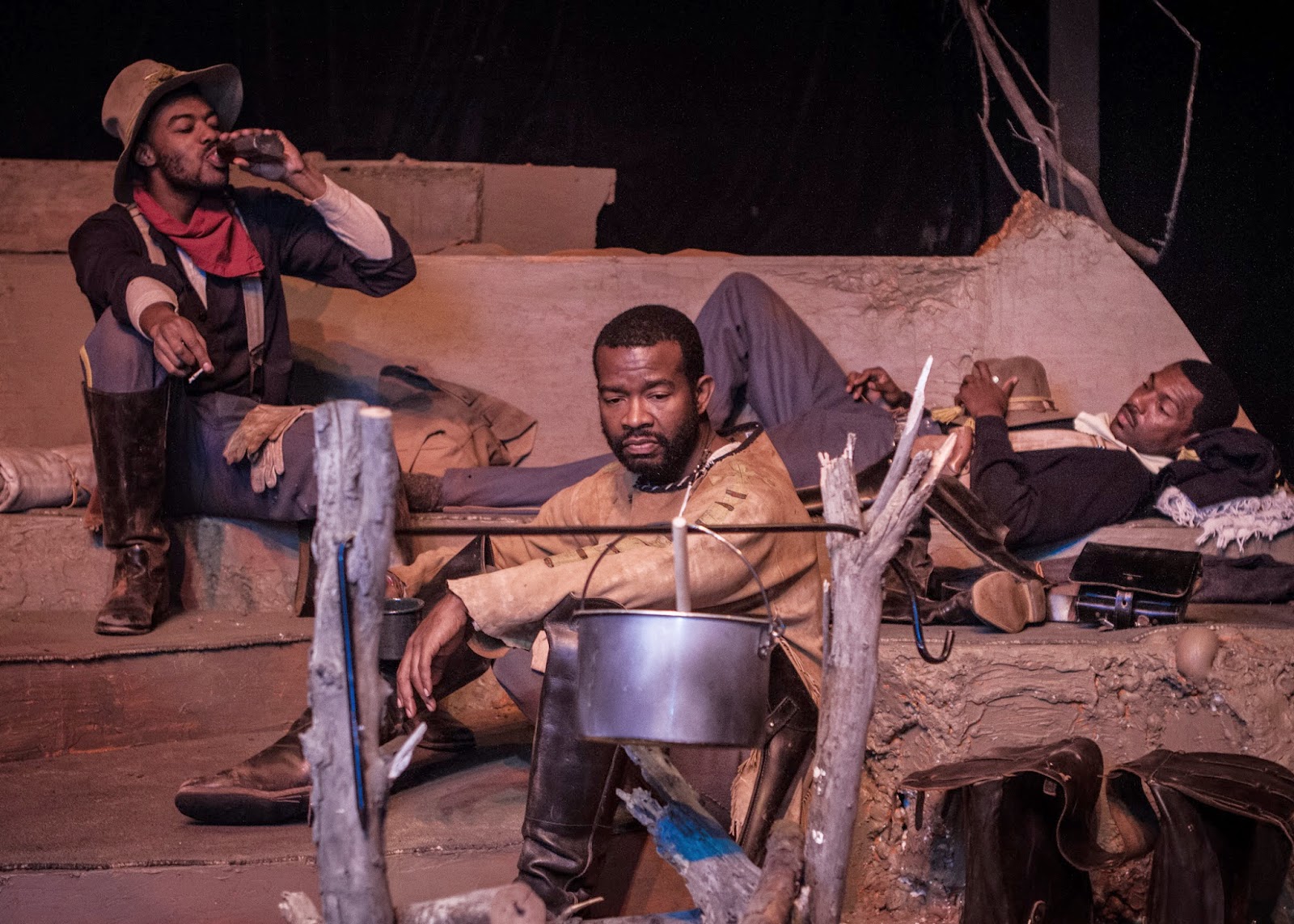 The Corporal stumbles upon a lone brave (Wasim No’Mani), and takes him into custody.  How to deal with the prisoner – and possibly many braves just outside the light of their campfire – becomes a crucial question when the soldiers learn that he is not just a brave: he’s Chief Quanah Parker, and the Comanche will not give him up without a fight.

To say that playwright Mitch Hale is committed to this story is putting it mildly.  He spent six years researching the history before he wrote his first draft.  First produced in Seattle in 1994, he’s continued to rewrite it ever since.  His inspiration was acting in the Vietnam-themed play TRACERS in 1987, and being struck by the outsized role blacks, other minorities, and poor whites took in the actual fighting.  He wondered how far back this pattern went, and learned about the heroic and largely unsung heroism of the black Cavalry soldiers, dubbed Buffalo Soldiers by the Indians because of the texture of their hair. 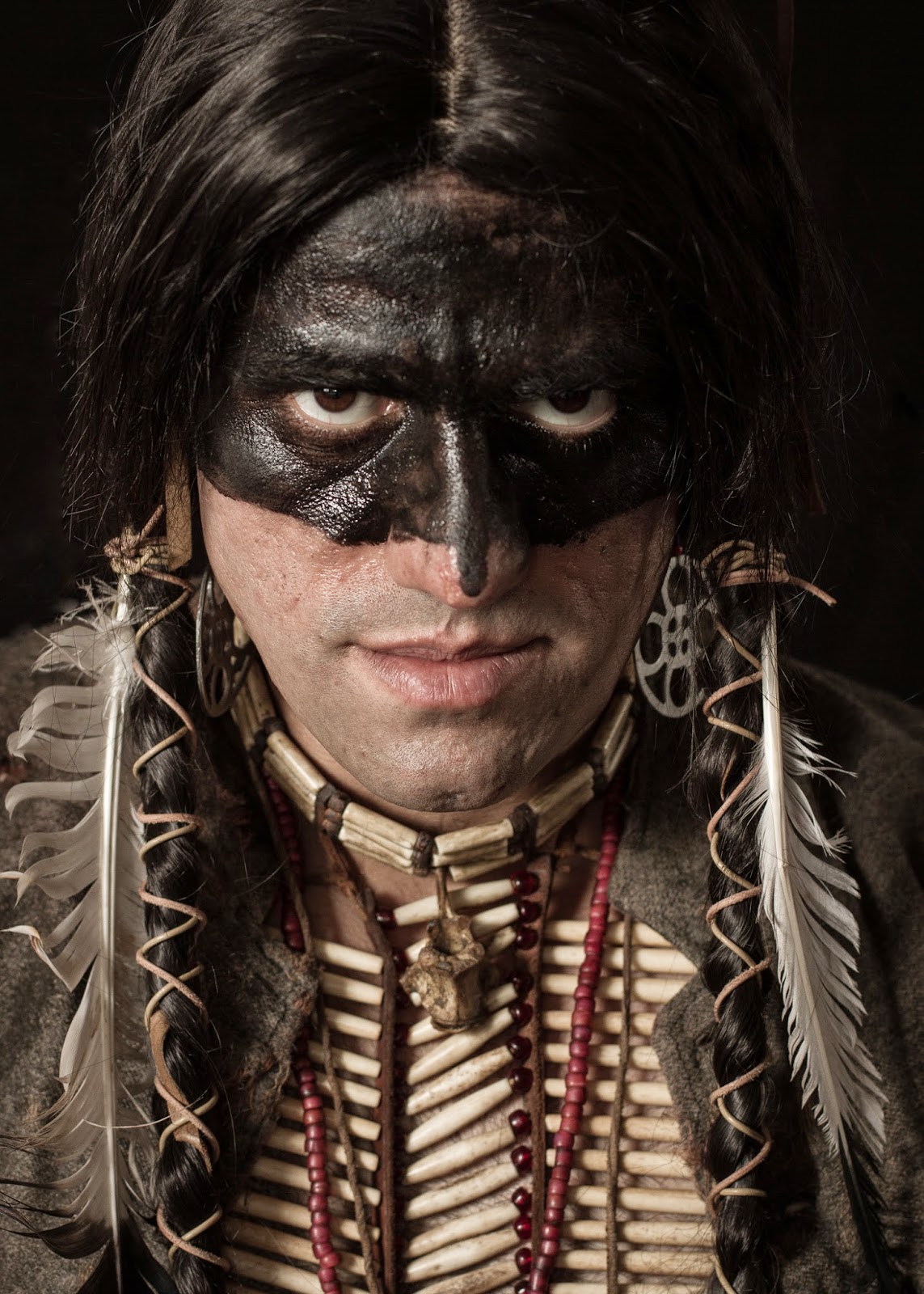 While the story’s core can be seen as informed with an awareness of parallels to the Vietnam War, BUFFALO SOLDIER is not a Vietnam story in the guise of a Western.  It stands firmly and confidently in its own boots.  As a matter of fact, the closest dramatic comparison is to Alfred Hitchcock’s LIFEBOAT, screenplay by John Steinbeck and Jo Swerling, with its boatload of passengers coping with captured Nazi sailor Walter Slezack.

It’s a gripping, suspenseful and emotionally involving story, and at the risk of sounding racist, it is all the more remarkable as the product of a self described “short skinny white guy from Denver,” who describes in his introductory Playbill notes having his name called for Best Play at the 1995 NAACP Theater Awards.  “Applause, applause, applause, I dash up the aisle, and as soon as I hit the stage – thundering silence.”

Sara Wagner skillfully directs the excellent ensemble cast in the 99-seat theatre, the audience nearly surrounding the stage, bringing an intimacy with the performances that is at times startling.  Evening performances are Thursday, Friday and Saturday nights at 8 p.m.  Matinees are Saturdays and Sundays at 3 p.m.  Tickets are $35, and the show runs through November 30th.
To learn more, or to purchase tickets, call 818-508-4200, or go HERE

FT. TICONDEROGA TREASURES UP FOR BID! 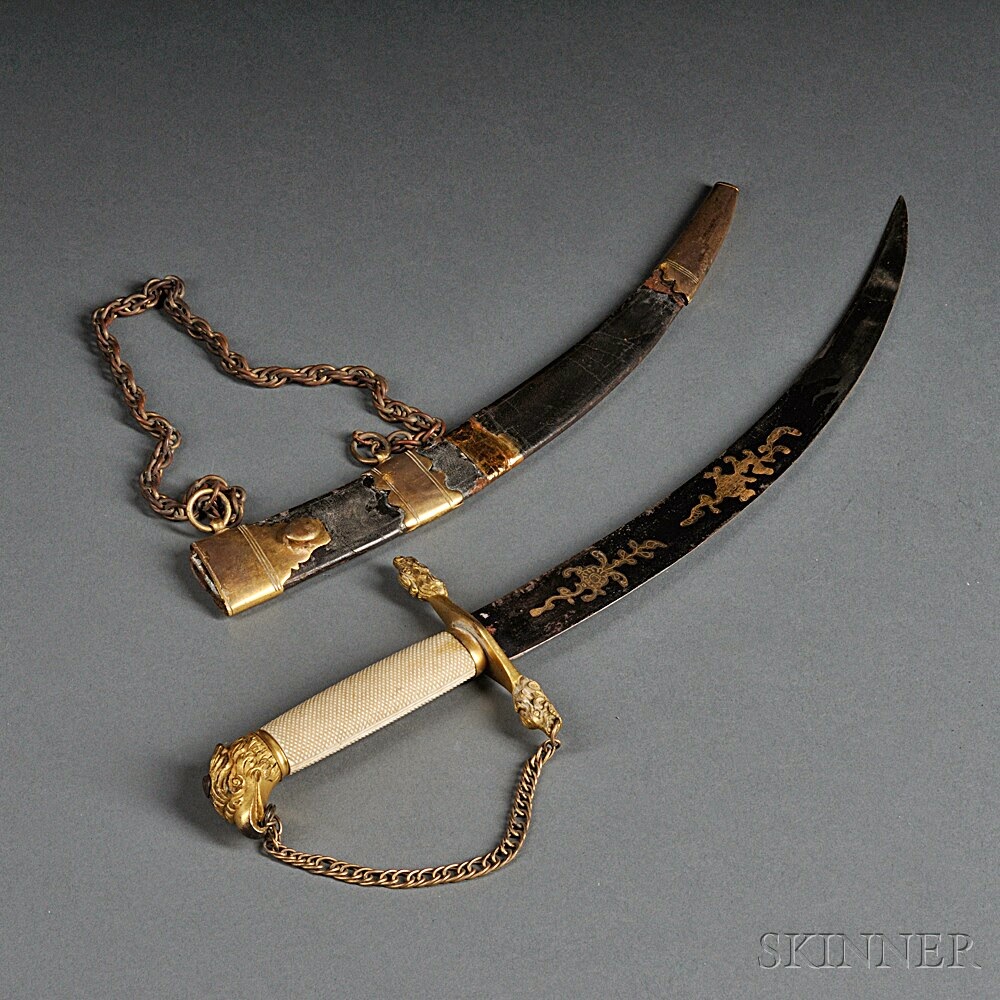 On Saturday, November 1st, at 10 a.m., you’ll have the chance to bid on some unique artifacts of American History.  Skinner, Inc., auctioneers, will be offering up items from the Fort Ticonderoga Museum, the New York State outpost that was a crucial site to Robert Rogers in the French & Indian War, and to General George Washington during the American Revolution.  More than 350 lots will be offered, all available both in person and online. 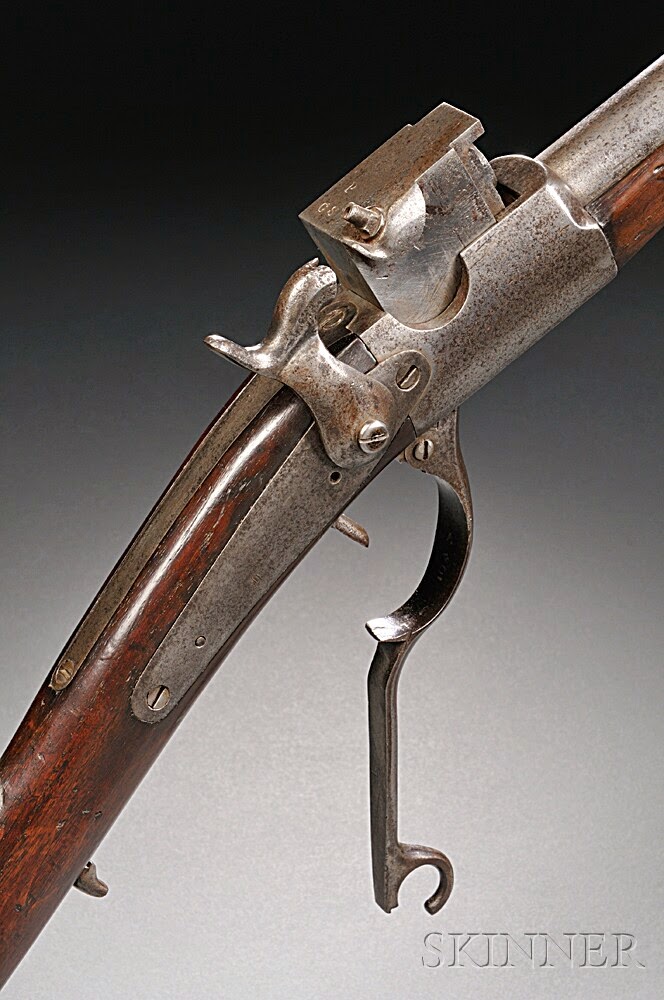 If you are like me, your immediate reaction is concern – is the Museum in trouble?  I am assured that it is not, and these items are being sold to expand the acquisition fund of the Museum, whose collection was begun in 1931, making it one of our earliest historic preservation and reconstruction projects. 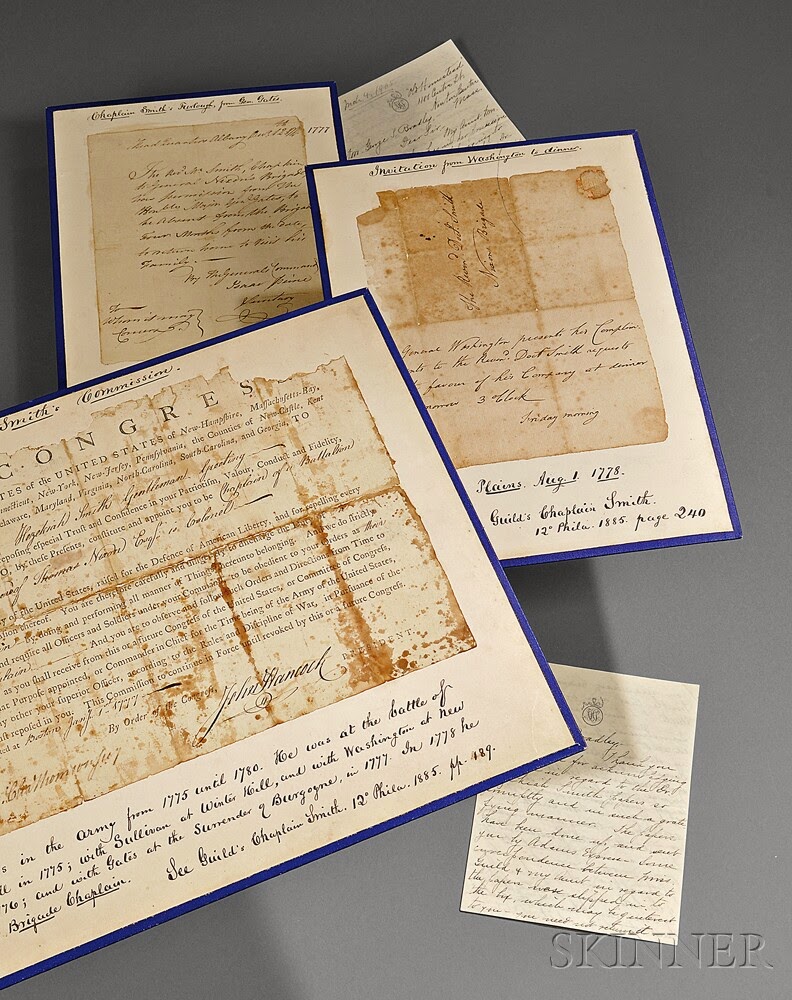 In addition to items directly related to the Fort’s history, the auction also features artifacts from the Civil War right up through World War II including pistols and muskets, rare Confederate carbines, and historic documents.  Among the fascinating documents are those of Reverend Hezekiah Smith, who later helped found Brown University.  His papers include a commission signed by John Hancock, and an invitation to dine with General George Washington. 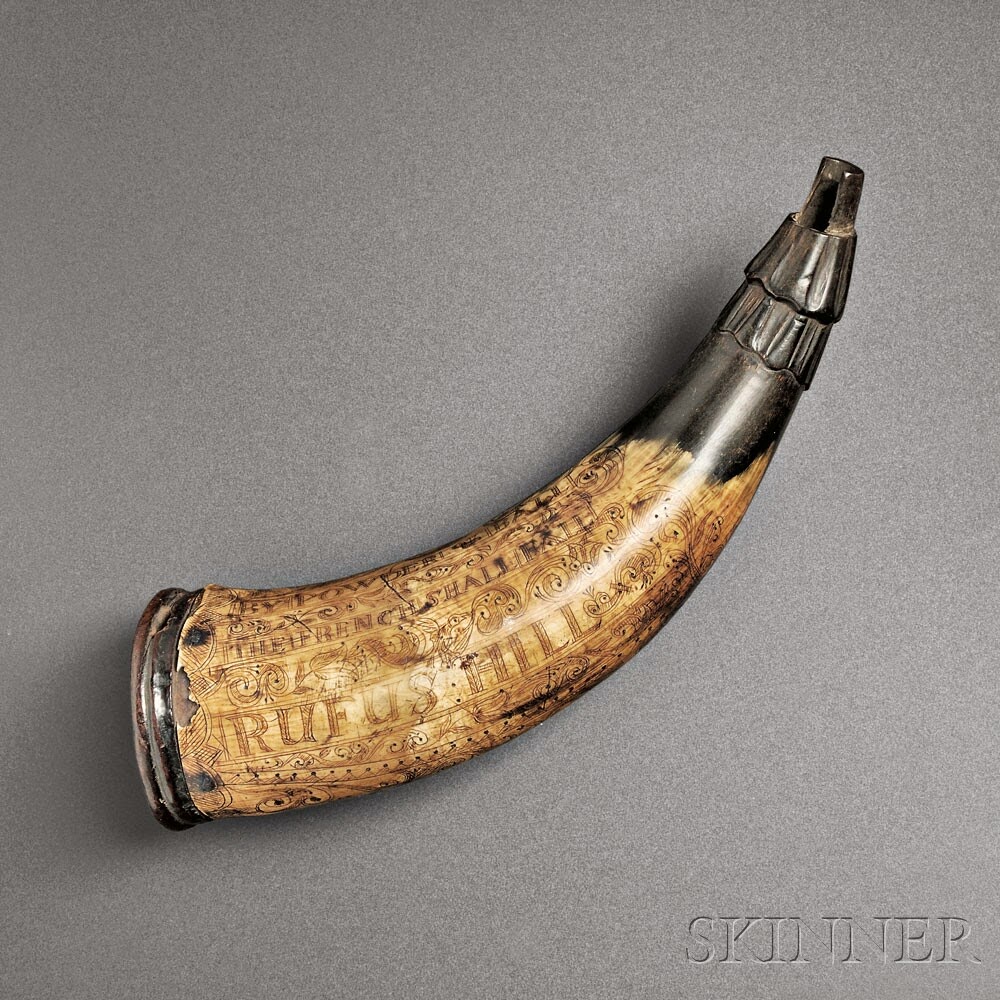 There are a lot of beautiful guns and eagle-pommel swords, but my favorite item is the French & Indian War powder horn, on which is etched, ‘By Powder & Ball / The French Shall Fall / Rufus Hill’. Go HERE to see the entire catalog, and to register to bid.  The auction will take place at 10 a.m. at 274 Cedar Hill Street, Marlborough, MA 01752.  All photos are courtesy of Skinner, Inc. 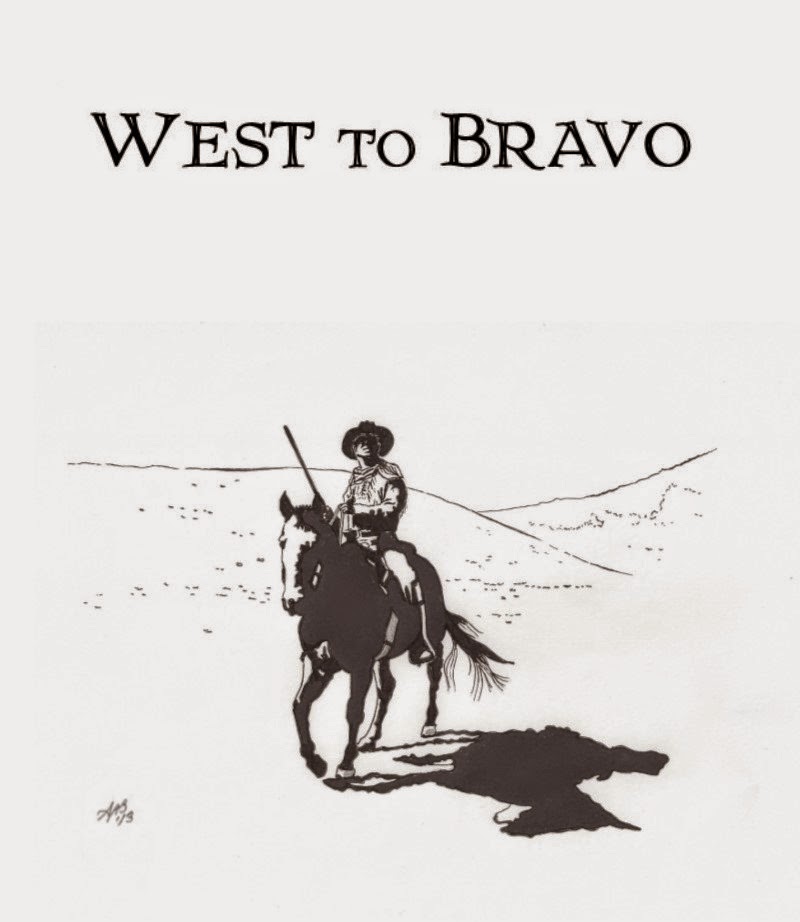 Artist Al P. Bringas, whose western art is on display at OutWest from October 25th through January 4th, and author Eric H. Heisner, will be shaking hands and signing Heisner’s new novel, WEST TO BRAVO, illustrated by Bringas, from 2 to 5 p.m. on Sunday, November 2nd.  BRAVO is a post-Civil War Cavalry tale plotted in the tradition of the great John Ford Cavalry Trilogy.  If you attend, dress like your favorite character from a John Ford western, or John Wayne western – or both – and have a chance to win a signed copy of the book!    The OutWest Western boutique and cultural center is at 22508 6th Street, Newhall, CA 91321.  Click HERE to learn more about the event! 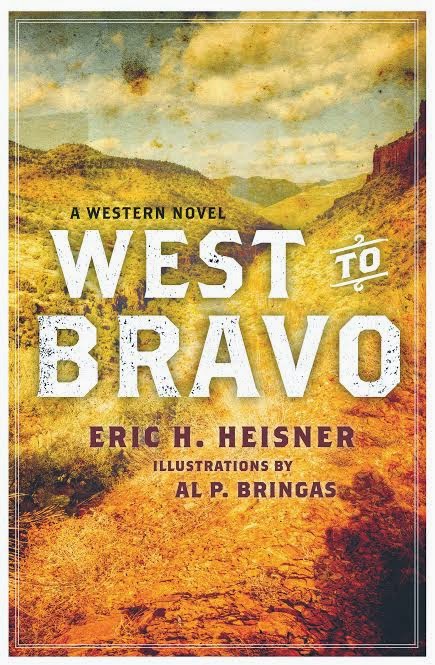 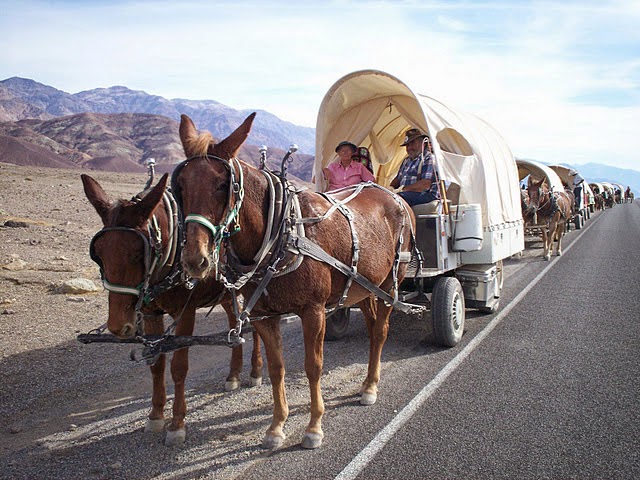 Head to Furnace Creek Ranch – and bring water and sunscreen – for a five-day celebration that will include a Western art show, wagon train, pioneer costume contest, Western music, woodcarving and needlework displays, horseshoe and gold-panning contests, trips to historic desert sites, and community breakfasts, and an 1849 poker tournament!  It’s at the Ranch in Death Valley National Park, and you can learn more by calling 831-818-4384, or visiting HERE

For a while I didn’t think I’d get this posted at all – the lights kept going out!  Then again, working by candlelight makes for a nice frontier atmosphere.  Have a great week, and next Sunday I’ll tell you about the Croatian Western I saw on Thursday, among other things! 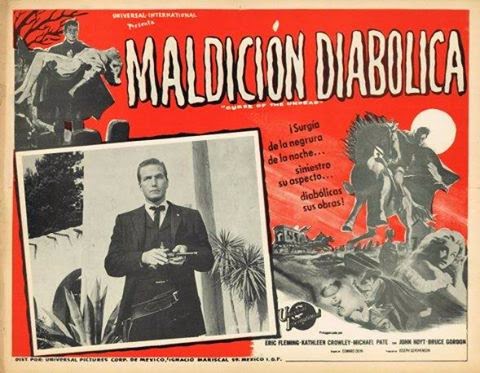 By the way, as it’s almost Halloween, what’s your favorite scary Western?  JONAH HEX?  COWBOYS & ALIENS?  ABRAHAM LINCOLN: VAMPIRE HUNTER?  It’s a thriller than a horror movie, but how about THE FIEND WHO WALKED THE WEST, with Hugh O’Brian, and soon-to-be master producer Robert Evans as the psycho?  My favorite is CURSE OF THE UNDEAD, with RAWHIDE’S Eric Fleming, and the great Aussie character actor Michael Pate as the vampire.  But I’ll bet you know of other good ones that I’ve missed.