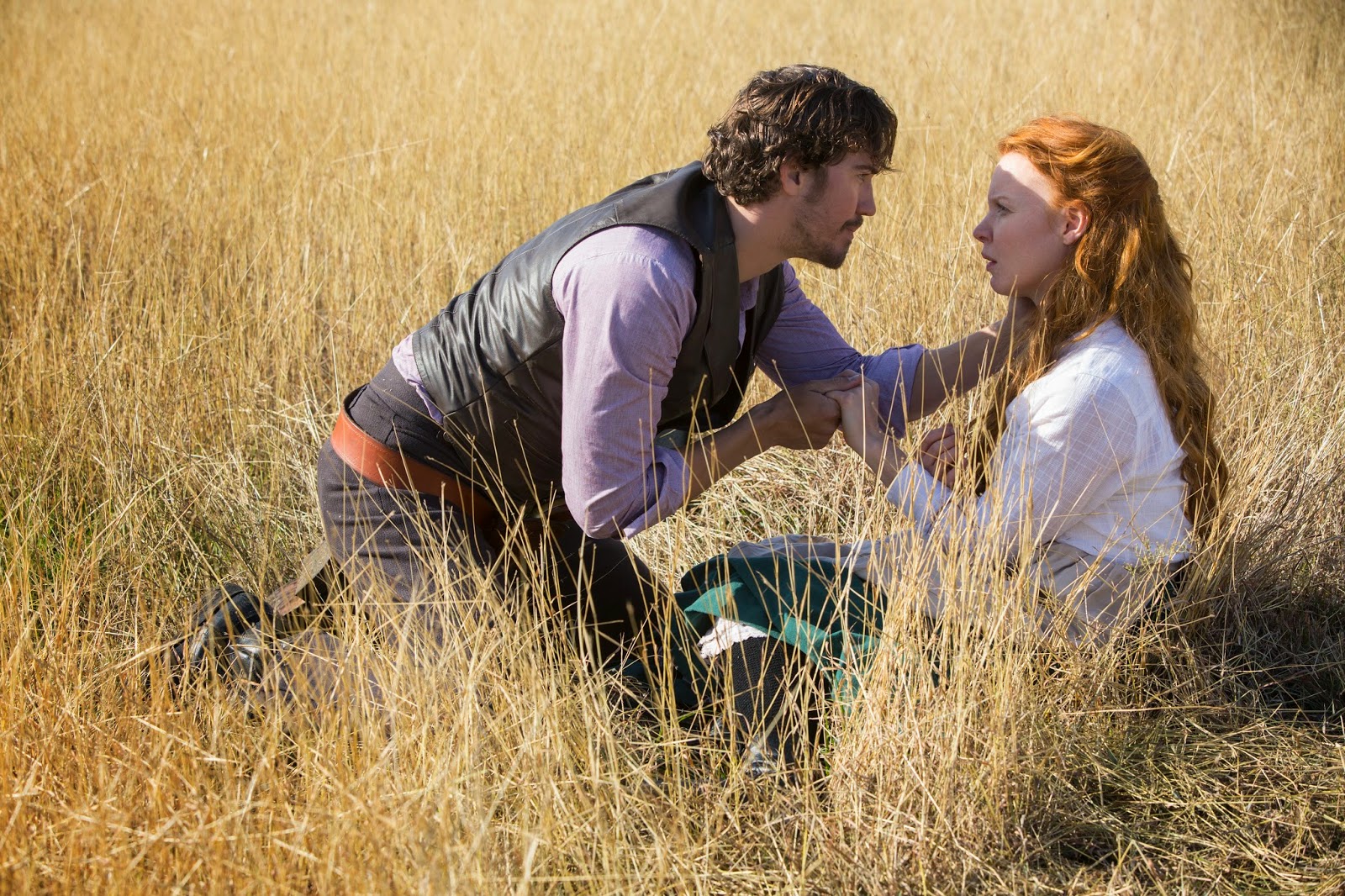 If you’re looking for a gritty, original, suspenseful Western with a taste of revenge, The Lifetime Channel would probably not be your first stop.  Nor would best-selling author Nicholas Sparks, of A WALK TO REMEMBER, NIGHTS IN RODANTHE and THE NOTEBOOK, be your first guess to produce such a film.  But DELIVERANCE CREEK is the first movie from Sparks’ new production company, it is on Lifetime, and it’s a very satisfying Western.  I should say it’s  satisfying, but it does leave you wanting more, which is fortunate, since it’s a back-door pilot that may yet go to series. 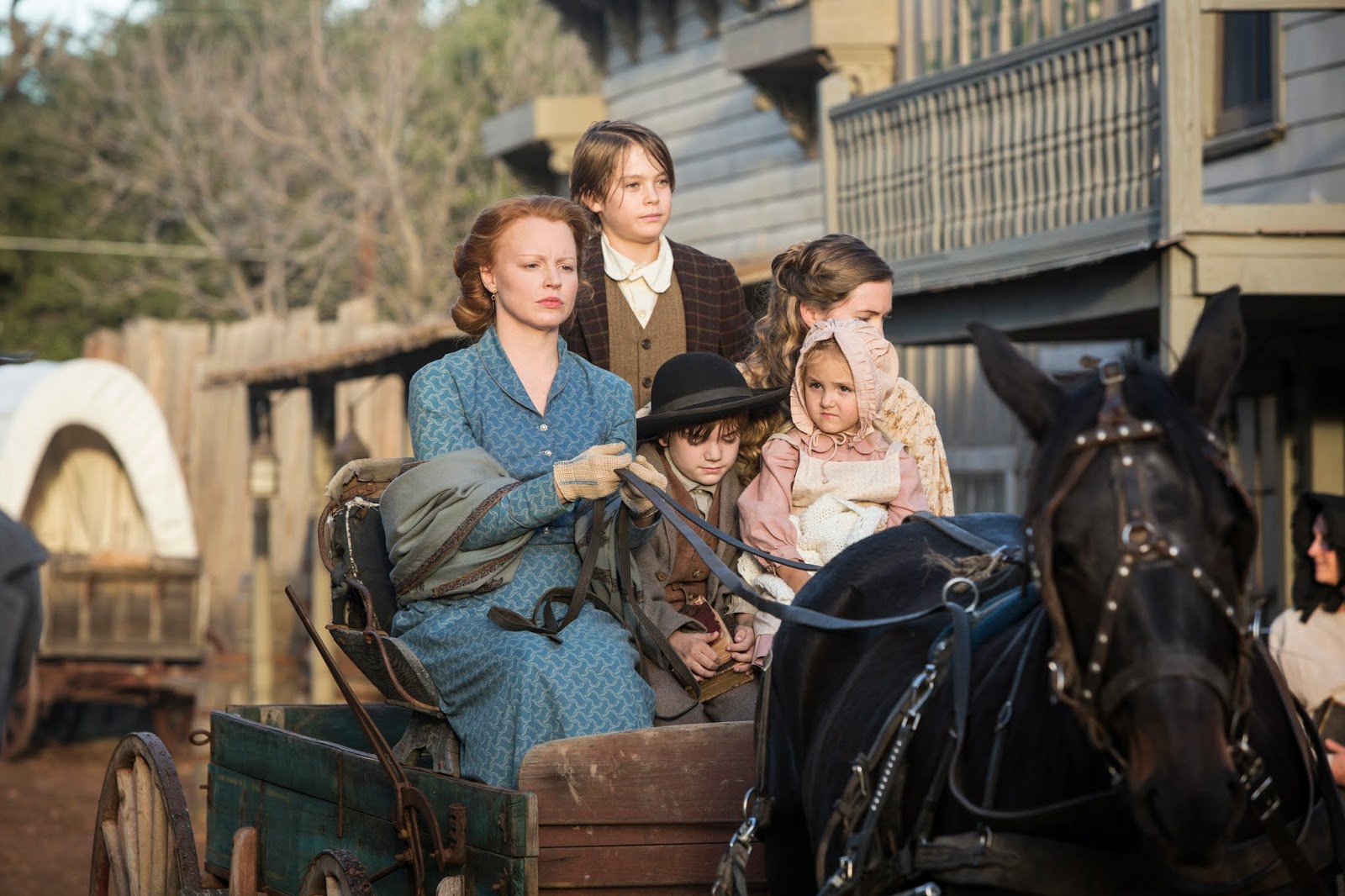 Set in the South, two years into the Civil War, it focuses on Belle Gatlin Barlow (crimson-tressed Lauren Ambrose), a mother of three small children, who suspects she’s a widow – her husband is off in the Confederate Army, and it’s been troublingly long since she’s heard from him.  This is a homefront movie, a familiar idea for the Second World War, but unusual for the War Between the States.  With the strong men off fighting the war, the males left at home are physically feeble or morally gutless or self-centered and opportunistic.  Strong women are mostly in charge, whether it’s Belle, the banker (Catherine Willis) who holds the note on Belle’s farm, Belle’s quietly abolitionist sister (Caitlin Custer), or the nearby house-slave (Yaani King) who’s staying behind when she sets her husband and children on the Underground Railroad.

Things are desperate enough for Belle, trying to keep her romance with the local lawman (Wes Ramsey) from becoming public knowledge,  and fending off the advances and deprivations of her banker’s husband (Barry Tubb), when who wanders back to her farm but her brother Jasper (Christopher Backus) and his men.  They’re fresh from the war, fighting for guerilla leader and sociopath Bloody Bill Anderson, and eager to hide out at the ranch while they plan the robbery of a Union payroll. 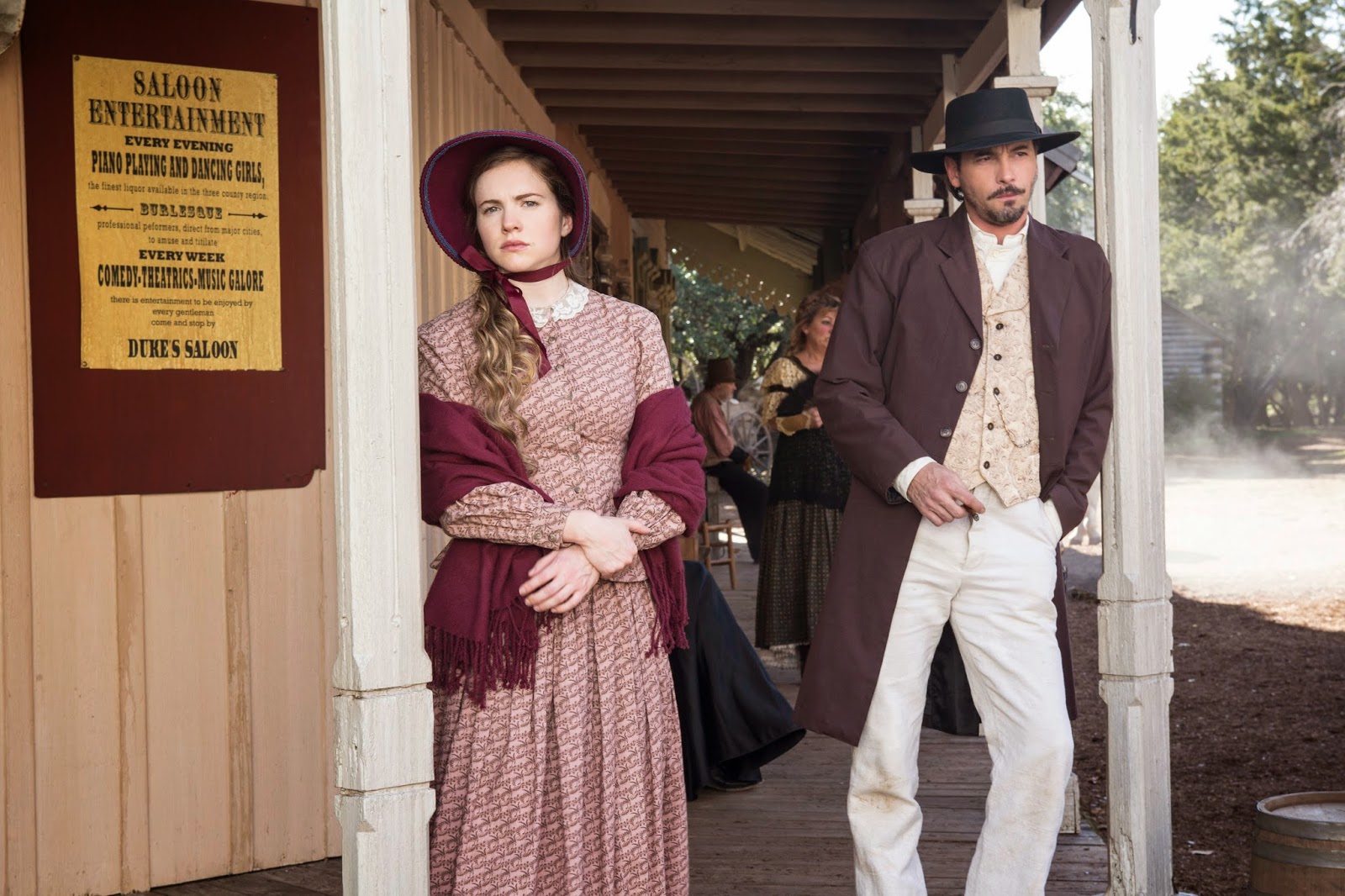 Desperate times drive people to desperate actions, and between foreclosing money-lenders, runaway slaves, Yankee soldiers and Confederate guerrillas, it’s no surprise that innocents die, and Belle straps on a gun. The chilling and bloody opening informs the viewer this isn’t what you think of as a TV-movie Western.  There is a sensible but startling amount of shooting and hanging and whipping, and accidents by people well-meaning but too-quick-to-fire.  The plot develops not mechanically, but often because people you’ve grown to like make stupid but believable and fatal judgments.  There is ample tragedy as well as hope.  Writer Melissa Carter is better known for her romantic comedies like LITTLE BLACK BOOK and JANE BY DESIGN, but she handles drama and suspense well.  Jon Amiel, director of the groundbreaking BBC series THE SINGING DETECTIVE has recently been helming THE BORGIAS, and has proved his skill in both action and comedy with films as diverse as COPYCAT, ENTRAPMENT and THE MAN WHO KNEW TOO LITTLE.  He handles the drama and action skillfully. 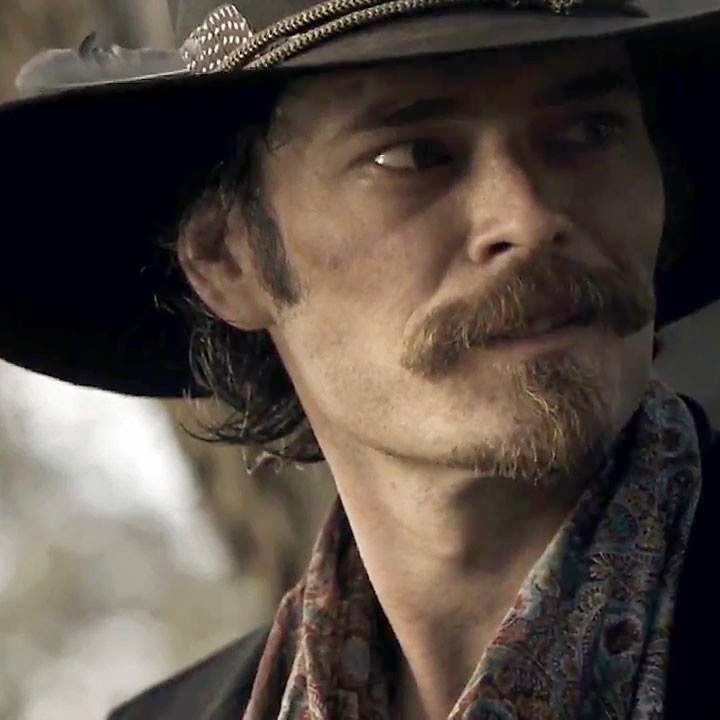 The sense of history is strong, in a story that could have become BAD GIRLS 2 if the filmmakers weren’t careful.  The performances are persuasive, and Lauren Ambrose, who must carry the story, is likable even as we worry that she’s too damned feisty for her own good.  The relationships are believable, both the affection and hostility convincing.   The women are cast well, as are many of the men.  In particular Christopher Backus, who previously starred in the Western YELLOW ROCK, has a great look for the period.  The art direction, and particularly the costume design by Kari Perkins, who previously dressed the Western LEGEND OF HELLSGATE, is excellent.  My only caution would be that some of the men’s faces seem too clean, too unlined for the lives they are supposed to have led.  Some lines and scars and dirt would be a welcome addition. Boy, do I hope this one gets picked up as a series! DELIVERANCE CREEK premieres on the Lifetime Channel on Saturday, September 13th at 8 p.m.

Here’s the first trailer to the much-anticipated new Spaghetti Western shot in Spain and cut in Texas (if you missed my recent coverage on this one, go HERE ) .  ‘SIX BULLETS TO HELL’ will premiere this month at the Almeria Western International Film Festival – see the next story for details. 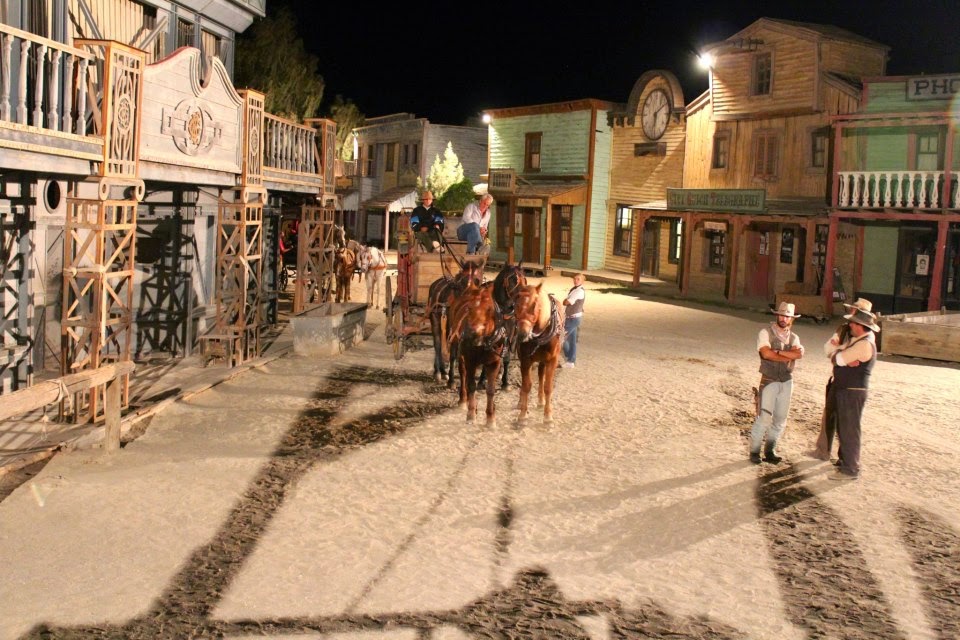 Despite distractions, interruptions, and the hijacking of the festival by the Mayor of Tabernas, Spain, the Almeria Western International Film Festival is going ahead, with a line-up of films that includes the premiere of 6 BULLETS TO HELL, DEAD IN TOMBSTONE, LA FLOR DE LIS, THE VIRGINIAN, PREY FOR DEATH, THE RETRIEVAL, FORAJIDOS DE LA PADAGONIA, and EXIT HUMANITY.  To see trailers for these films, and learn more, visit their website HERE to learn more! 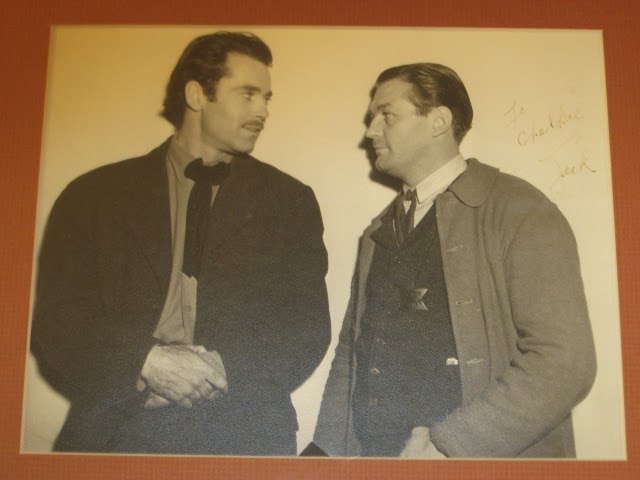 Last week I posted a signed photo my daughter had picked up for me, featuring Henry Fonda and an unidentified actor.  (If you missed that exciting post, go HERE  ) It was signed, but not by Fonda.  It was signed by ‘Jack’ to ‘Chalky’.  The big mystery was, who was the Jack in the picture, and who was Chalky who was given it?  The solution, not surprisingly, came from Michael F. Blake.  The son of character actor Larry J. Blake (who has the first line of dialogue in HIGH NOON), Michael is an accomplished film historian and author of HOLLYWOOD AND THE O.K. CORRAL, CODE OF HONOR – THE MAKING OF THREE GREAT AMERICAN WESTERNS, and three books about Lon Chaney.  He’s also a busy film make-up artist, working recently on THE LONE RANGER and LINCOLN.  He and I also are both interviewees in TCM’s Western Fanatics short (you don’t know about that one?  Check it out below!)

Mike emailed me, “Henry, the photo is definitely not from MY DARLING CLEMENTINE.  My gut says THE RETURN OF FRANK JAMES.  As far as Chalky, to my eye he looks a lot like Chalky Williams, who was a bit player/extra in many, many films & TV shows.  He lived across the street from me in the mid-1960s on Hollyglen Place in Studio City.  I never knew or heard of another guy named Chalky, nor did my dad ever mention another person with that name.”  So, if it’s Chalky Williams in the picture, then Jack is presumably the guy who took the picture of Fonda and Chalky together, and gave it to Chalky.  A quick check on IMDB shows that Chalky and Fonda worked together on BIG HAND FOR A LITTLE LADY (1966) and THE CHEYENNE SOCIAL CLUB (1970), but the picture is clearly from the late thirties or forties, so I’ll go with RETURN OF FRANK JAMES (1940).  Thanks Mike! 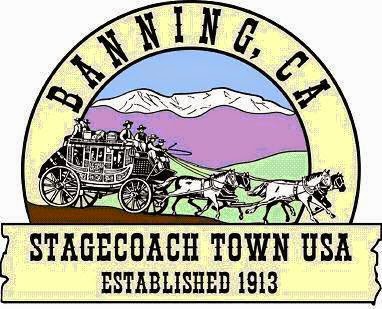 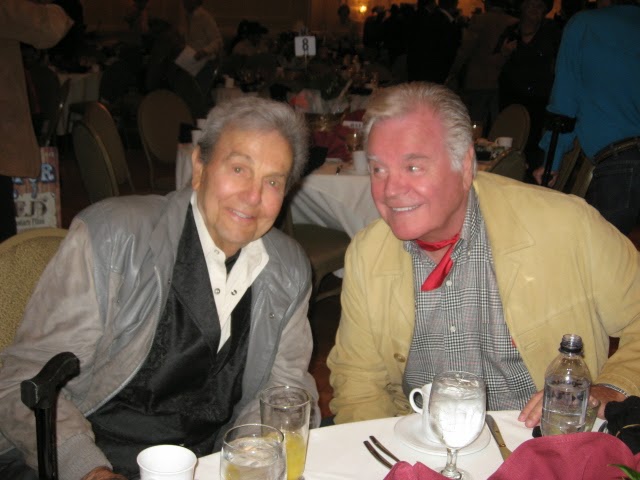 Once again it’s almost time for the Silver Spur Gala Awards, honoring careers in Western film and television.  This year’s Master of Ceremonies will be Darby Hinton, Israel Boone from the DANIEL BOONE series, and soon to be seen in the Western mini-series TEXAS RISING!  This year’s honorees are Clayton ‘The Lone Ranger’ Moore, represented by his daughter Dawn Moore; director of CALL OF THE WILD and THE OX-BOW INCIDENT William Wellman, represented by his son, William Wellman Jr.; the late actor, star of THE RESTLESS GUN, John Payne; WAR OF THE WORLDS star and frequent Western TV guest star Ann Robinson; MCCLINTOCK! and STAGECOACH (1966) star Stephanie Powers; 7 BRIDES FOR 7 BROTHERS and SERGEANTS 3 star Ruta Lee; and GLORY and POSSE actor and stuntman Bob Minor.

A portion of the proceeds will go to the John Tracy Clinic, which helps young children with hearing loss.  For the best seating, VIP tickets are $175 on-line and $195 at the door.  General seating is $125 on-line and $145 at the door.  To learn more, and to buy tickets, visit the official website HERE. 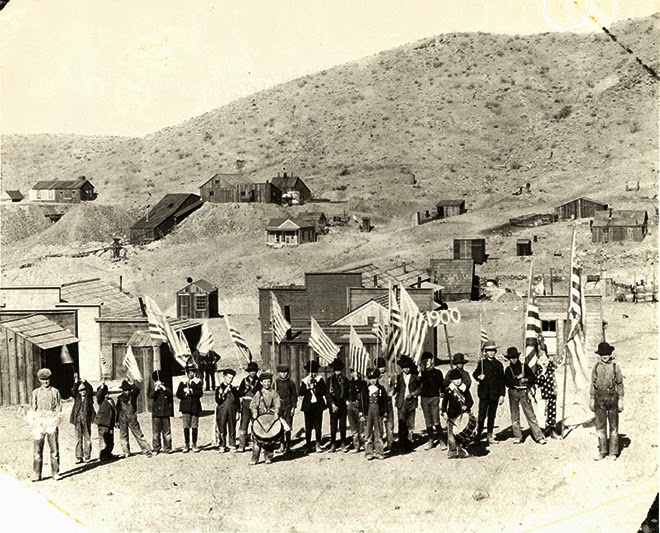 Travel to this one-day fund-raising event at and for the Rand Desert Museum in the Mojave Desert!  You can pan for gold, ride the trolley, and watch cowboys and bandits battle!  There will also be bluegrass and country bands, a vintage car show, art vendors, a pancake breakfast and barbecue.  To learn more, go to the Museum’s official site, HERE.

Happy Labor Day!  September 14th would have been Clayton Moore's 100th birthday, so next week I hope to have my coverage of the Clayton Moore Tribute panel at the Cinecon, as well as my interview with The Lone Ranger's daughter, Dawn Moore.  Have a great week!