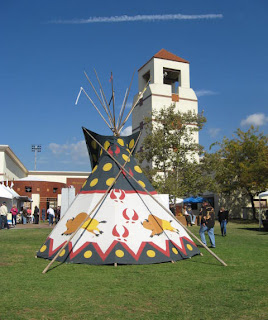 From all over the country they came, nearly two-hundred American Indian artists, to display and sell their art.  The artists and their art were in an immense tent beside the Autry.  In the mail courtyard, there was continuous entertainment by story-tellers and dancers.  There were tours of the permanent collection, and of the Art of Native American Basketry -- one of my favorite displays, lectures, play readings, short film screenings, children's activities and, for people who like a little cowboy with their Indian, a double feature of Gene Autry Westerns. 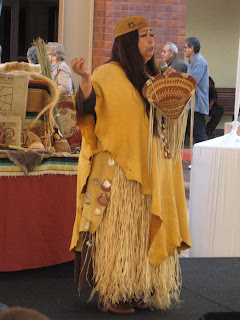 There was art in every medium imaginable.  Among my favorites: 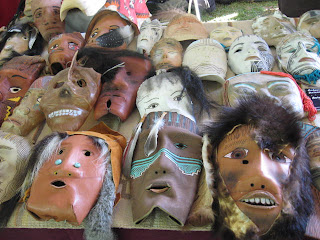 "If you need masks, I'm your man," said Timothy Antonio, a Dine' of New Mexico.  tim.antonio@yahoo.com 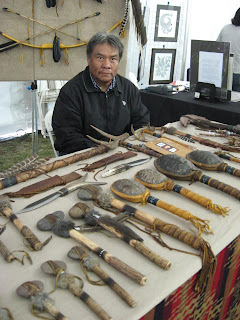 Amos Hasken, a Navajo from Arizona, who specializes in weapons and ceremonial pieces.  haskenamos@yahoo.com 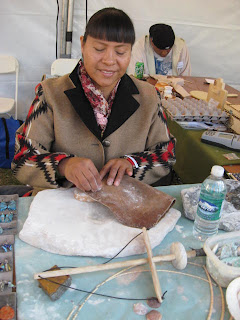 Traditional Pueblan jeweler Priscilla Abeyta, of the Kewa/Santo Domingo in New Mexico, is doing the final polish of stone on leather.  priscillaspueblogifts@gmail.com 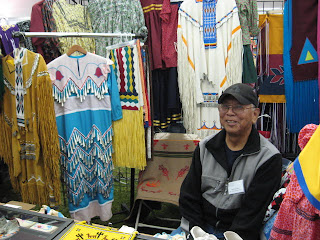 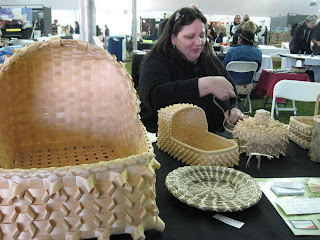 Basket-weaver Kelly Church, Ottawa/Ojibe from Michigan, taught me that among the weave styles you are looking at are porcupine point, curlycue and loop (but she didn't teach me how to do them).  artcove@hotmail.com 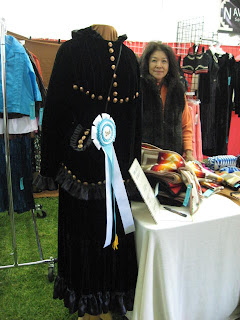 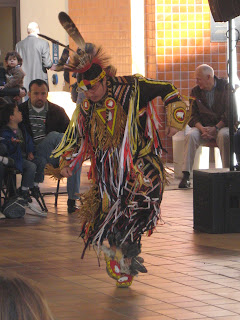 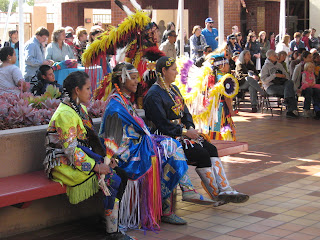 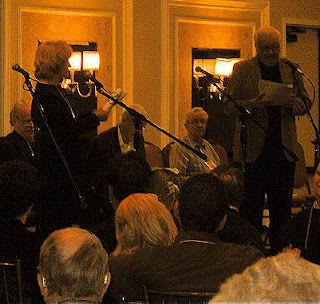 At the Saturday, November 5th ‘Honorary Members Appreciation Luncheon,’ Old Time Radio veterans and fans were treated to four radio show reenactments.  SPERDVAC stands for the Society to Preserve and Encourage Radio Drama, Variety And Comedy, and the shows presented at the Grand Ballroom of the Beverly Garland Holiday Inn included MY CLIENT CURLEY, by radio’s Poet Laureate Norman Corwin, who passed away just over a week ago, at the age of 101.  There was an original radio play, I LOVE LUCY: THE UNTOLD STORY, by Gregg Oppenheimer, based on his book.  They also performed Lucille Fletcher’s classic suspense radio play, SORRY, WRONG NUMBER, with Janet Waldo as the bedridden woman who hears her own murder being plotted – the role that made Agnes Moorehead a star.  Said audience member Michael Stern, “It was fabulous!  It was a fun day for a person who’d never heard a radio show before!” 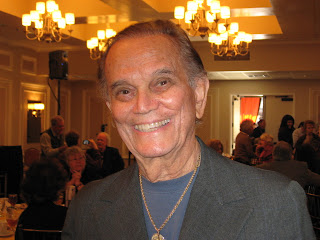 For Western fans, the highlight was the recreation of the great James Stewart series THE SIX SHOOTER, this episode written and directed by Tim Knofler.  As Chuck McCann explained before the show began, they usually did a dress rehearsal before the performance, but after last year’s show they decided to try doing the show cold, in effect doing the dress rehearsal for the audience.  The result was hysterical, a mix of fine acting combined with ad-libbing when sounds effects were missing, music cues were wrong, or script pages were out of order -- or whenever the cast felt like having fun with it. 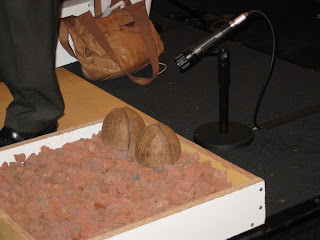 (Stewart's horse, Scar, portrayed by two cocoanuts in a box of gravel) 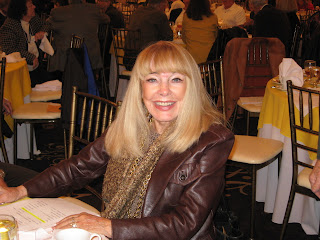 It’s worth noting that as interest in Old Time Radio is waning nationally – conventions are being cancelled or having their final get-togethers – in it’s going strong.  The World War II BBC-themed comedy CHAPS just opened on Saturday (for information, read last week's Round-up; for tickets call 818-509-0882), and just this morning author A. J. Fenady told me about a new radio-reading stage production of his play, YES VIRGINIA, THERE IS A SANTA CLAUS.  Incidentally, I’ll have an interview with A.J. about his TV series, THE REBEL and BRANDED, and his movie with John Wayne, CHISUM, very soon in the Round-up! 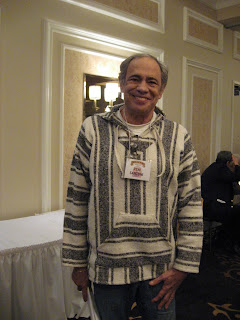 (Reni Santoni)
TRIBUTE TO JOHN   NOV. 10TH AT ARCLIGHT
On Thursday, November 10th, 7:00 pm at the Cinerama Dome/Arclight Hollywood, Wayne’s sons Patrick and Ethan, and co-star Kim Darby will take part in a gala tribute to the Duke, which will include a screening of the picture that won Wayne his Oscar, TRUE GRIT. The event is presented by The Jules Verne Adventure folks, who did such a tremendous with their 40th Anniversary tribute to THE WILD BUNCH.  Tickets are $25 to $50, but you might do even better if you are a Goldstar member, or under 20 years old.  Learn more, and buy tickets HERE.
‘UNFORGIVEN’ SCREENS SATURDAY, NOV. 12TH AT THE AUTRY
Winner of four Oscars for Best Picture, Best Director – Clint Eastwood, Best Supporting Actor – Gene Hackman, and Best Editing – Joel Cox, UNFORGIVEN (1992) is shown as part of the Autry’s ‘What is a Western?’ series, and will be shown at 1:30 pm in the Wells Fargo Theatre, in 35mm, introduced by curator Jeffrey Richardson.


I guess thatr'll do it for today.  Next week I'll have in-depth coverage of the YELLOW ROCK premiere at the Red Nation Film Festival!  Don't forget the premiere of HELL ON WHEELS on AMC Sunday night!