THE MAN WHO WOULD BE 'PECOS' 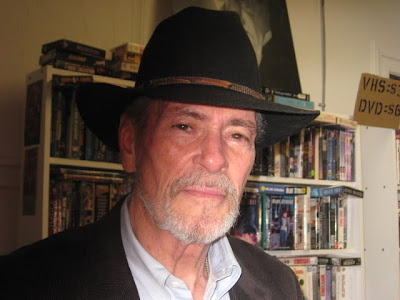 AMC 7:30 p.m. SILVERADO (1985) Larry Kasdan directs from a script he wrote with his brother Mark. Lots of good stuff in it, but at 133 minutes, it's at least a half hour too long. Starring Kevin Kline, Scott Glenn and Kevin Costner.

AMC 5:00 p.m. PALE RIDER (1985) Clint Eastwood directs and stars as a mysterious stranger (can you believe it?) protecting a town from bad guys. Moody and effective, script by Michael Butler and Dennis Shyrack, and featuring Carrie Snodgrass and Michael Moriarty.

Saturday March 13th
AMC 6:30 a.m. THE RARE BREED (1966) Lovely Maureen O'Hara shines as the widow trying to introduce the Hereford breed to Texas, with the help of James Stewart and the hindrance of Brian Keith. Andrew V. McLaglen directs from Ric Hardman's script. Featuring Jack Elam, Ben Johnson, Harry Carey Jr., and a great early score by John -- then it was Johnny -- Williams.

AMC 8:45 a.m. WINCHESTER '73 (1950) One of the finest, darkest collaborations between director Anthony Mann and James Stewart. It's all about the quest for "one out of one thousand," the special Winchester rifle that men will do anything to possess. The chilling script is by Robert Richards and Borden Chase, from a story by Stuart Lake. Stars Shelly Winters, Dan Duryea, Stephen McNally, and, among a lot of great faces, a very young Roch Hudson and Tony Curtis.

TCM 11:0 a.m. WILL PENNY (1968) One of Charlton Heston's best westerns, as an on-the-run outlaw taking up with frontierwoman Joan Hacket. Written and directed with guts and sensitivity by Tom Gries, and featuring Donald Pleasence, Lee Majors, Bruce Dern and Ben Johnson.

TCM 3:15 p.m. RIDE THE HIGH COUNTRY (1962) One of the first, and one of the greatest Peckinpah's! Two over-the-hill lawmen, Randolph Scott and Joel McCrea are hired to transport gold. It's Scott's last, McCrea 2nd to last, and lovely Mariette Hartley's first (despite claims by Hitchcock). Written poetically by N.B. Stone.

TCM 5:00 p.m. GOD'S LITTLE ACRE (1958) Erskine Caldwell's novel about dirt-poor folks hunting for treasure was so racy for it's time that many considered it pornography. Anthony Mann directs the screenplay by Ben Maddow, but credited to Philip Yordan, his 'front' during the witch hunts. Starring Robert Ryan, Aldo Raye and Tina Louise.

I'll have the events for the week either late Sunday or on Monday -- I'm stopping to watch the Oscars!